We're nearing the crescendo of the 2019 championship season and it feels like it's only grudge matches left.

Grudge matches in Gaelic Games, as in most sports, usually spring from geographical proximity.

It's an undisputed truth of Irish life that the most low, the most immoral, and the most disreputable people in the entire country, if not the entire planet, always reside just over the border in the neighbouring county.

They are always the most unbearably cocky in victory and the most pathetically graceless in defeat. They are hateful.

But it's not just geography in play. No, the Leaving Cert's other optional subject, history, is a major factor.

Familiarity breeds contempt in hurling and Gaelic football. Play each other often enough and that gloriously energising hatred will fester. There's nothing like a couple of bitter defeats to foster a longstanding animus. Even a couple of wins can do the trick provided the beaten party are deemed sour enough in the aftermath.

Some grudge matches fizzle out to be replaced by others. Avoid each other for long enough in the draw and one's feelings of disdain may eventually flower into gentle indifference. What the current UK prime minister calls 'the blessed sponge of amnesia' will begin to work its magic. You may even incline to support the old rivals should they come up against your new grudge partner in chief.

However, lose another tight game to them and you'll remember anew why you hate that crowd.

Coming down the tracks at us this month we've a grand, old rivalry between two aristocrats, a faded dispute and the new bitterest rivalry in the business. 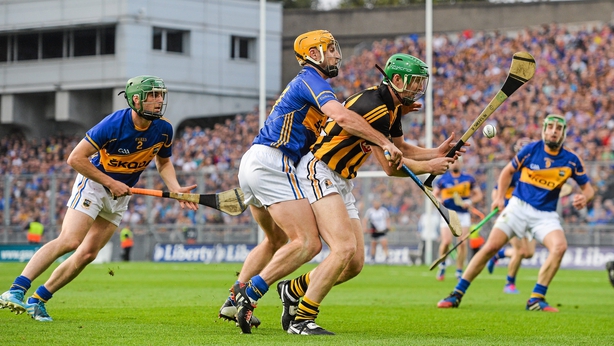 The All-Ireland hurling final, still over a week away, gives us the former.

More or less every hurling county has a serious beef with Tipperary, supposedly owing to some slight in the past.

Nicky English smiling at them perhaps, or maybe something one of the Hell's Kitchen chaps did.

Or maybe Babs told them at a function that that All-Ireland they won shouldn't count at all because Tipp got knocked out early that year.

Those who are hot on geography might point out the relevance of Tipp's location, bordering almost every serious hurling county. But that's far too mundane and obvious an explanation to be satisfactory.

Kilkenny evidently get a particular buzz out of pricking the Tipperary balloon. The loudest, most guttural roar at the 2011 final homecoming arrived when corner-back/balladeer John Mulhall encouraged Tipperary to 'póg' his 'thóin'.

It appears they don't get the same thrill out of downing other counties in All-Ireland deciders.

When this writer was traipsing out through the bowels of the Davin Stand following the conclusion of the 2015 All-Ireland final, he happened upon a touching scene where a middle aged Kilkenny supporter greeted an elderly Kilkenny supporter with a rousing cry of "Well Ned, another one chalked off I suppose..."

Such scenes of joy confined.

Kilkenny have endured an intolerably long famine and the sight of Tipp landing into Dublin town should get the fans' juices flowing.

Among the players, however, we hear there is nothing but savage respect for one another.

This is in stark contrast to the Cork-Kilkenny grudge of the mid-noughties, when reports had it that both sets of players eyed each warily on All-Star trips, like the rival news teams from Anchorman.

It's up to the fans then to raise the rancour levels higher. Think John Mulhall at that homecoming.

The football semi-finals are the immediate matter on the horizon.

Time was Kerry-Tyrone was the bitterest rivalry going. Back in the noughties, the northerners persisted in beating Kerry longer than the purists deemed appropriate.

Some Kerry fans attempted to camouflage their annoyance in high-minded distaste for Tyrone's defensive approach.

This mentality did not survive the aftermath of the 2014 All-Ireland final.

There was the 'puke football' game in 2003, Peter Canavan's final match in 2005, and then the most unexpected of them all, Tyrone halting the Kerry three-in-a-row with a late surge in the 2008 final.

Tales of epic sledging feats abounded and endless, petty 'team of the decade' debates followed. Every year that Tyrone took off, Kerry proceeded to win the All-Ireland, invariably beating Mayo or Cork in the final, usually in a one-sided game.

Tyrone fans, and sometimes Ulster folk generally (the northerners often presented a united front when it came to dissing Kerry, regardless of their feelings on Tyrone) took great delight in dismissing these All-Ireland victories, often roping in Kerry's allegedly handy route through Munster in comparison to the bear-pit through which they had to wade. Ulster was the north face of the Eiger while Munster was a gentle hike up Mount Brandon.

Some Kerry fans attempted to camouflage their annoyance in high-minded distaste for Tyrone's defensive approach.

Kerry finally slayed the dragon in a Round 3 qualifier in July 2012 but, by then, the dragon was struggling with its breathing and about to keel over.

Mickey Harte was surrounded by local autograph hunters on the pitch afterwards and he and his team were applauded as the boarded the bus for their long journey home.

Tyrone GAA released a statement paying tribute to Kerry for the post-match reception.

And that's almost it. The two teams subsequently met in the 2015 All-Ireland semi-final but it lacked the venom and anarchy of old. Kerry, then reigning All-Ireland champions, won by marginally less than was expected against a developing Tyrone team.

Only Mickey Harte remains from the fractious days of the noughties.

The sting may have gone out of the Kerry-Tyrone rivalry but the new kid on the block is still going strong, reaching new heights of rancour.

The Dublin-Mayo rivalry is the grudge match of the era in the GAA. 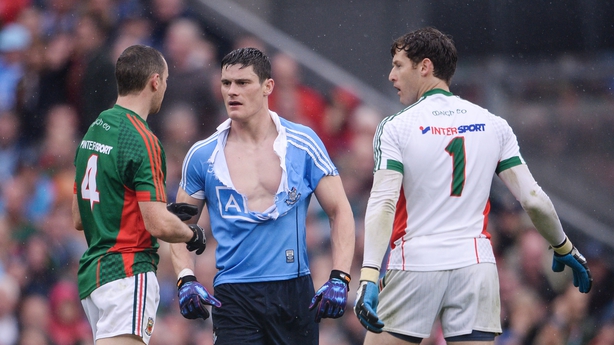 The two have met no fewer than seven times in the championship since 2012, four of them being All-Ireland finals, and the other three being semis. The relationship was always going to become frayed and bitter.

There was a bit of a ruckus on social media during the week as some of Hill 16 on Tour's finest wits unveiled a flag in Omagh bearing the message 'Mayo are Shite'.

The online community of Mayo football fans rose in disgust. The twitter handle @onlinegaa was tagged and they were asked what they intended to do about it.

Not for the first time, the Dubs were accused of bringing the most dismal form of Man U v Liverpool-style 'bantaaaar' into Gaelic football. It's an old accusation that. Didn't they sing 'You'll Never Walk Alone' on the pitch in '74?

Most of the Dublin fans who responded did not attempt to defend the flag as the gold standard in humour but did argue some Mayo supporters were being a tad snowflake-y about the thing.

One can though understand the Mayo sensitivity on the matter. It's a rare event to see such a message on a banner at a GAA match, not least a banner aimed at a team that aren't actually playing.

Curiously, in the Dublin-Mayo rivalry, most of the contempt seems to come from the supporters of the team who keep on winning.

There was a bit of a ruckus on social media during the week as some of Hill 16 on Tour's finest wits unveiled a flag in Omagh bearing the message 'Mayo are Shite'.

There is a relentlessness to the baiting of Mayo players and supporters that can seem jarring.

Those of us who were once engaged in the noble task of moderating online comments sections were very much at the coalface of this.

Usually, when players toddle off into retirement, the messages are of the warm, 'he owes his county nothing' variety.

But when former Mayo midfielder Barry Moran announced his retirement in 2018 after a decade of service, our former comments section was a house divided.

50% of contributions were from Mayo (and other) fans paying tribute in the traditional vein.

The other 50% of messages, however, were along the lines of  'pity you didn't win an All-Ireland ya Mayo loser. LOL. Up the Dubs'.

This, as anyone who spends too much time on the internet will tell you, is the tone of much of the engagement between Dublin and Mayo supporters.

The current Mayo team, in addition to being one of the most admired and resilient outfits, are an abrasive beast. As such, they've acquired plenty of enemies.

The traditional rivalry with Galway seems to have ratcheted up in spite this decade. The Rossies, to whom they pay less attention, appear to harbour even greater resentment towards them.

As for Kerry, most of the bitterness resides in Mayo breasts. The losses in the noughties left scars but the 2014 defeat was even harder to stomach.

But it is the Dubs who are their chief adversaries in the modern era. They should perhaps take the Dubs' contempt as a compliment.

The consensus is that the current Mayo team is on its last legs. This is the final shot at glory. That being so, this could mark the final installment in this decade's bitterest rivalry.