It may have been a case of shadow boxing in a phoney bout as two teams played out a dead rubber, but this Healy Par tie delivered an honest contest, with a couple of dozen players seizing their opportunity to push their way into match-day squads for next weekend's All-Ireland semi-finals.

In that regard, Jim Gavin and Mickey Harte squeezed the last drop out of a high profile trial game played out in front of 15,315 spectators.

And few in that collective left the Omagh venue complaining that they had been short-changed by the quality of this August offering, despite the fact that it was an All-Ireland quarter-final that neither side particularly wanted to win.

Dublin’s six points Super 8s victory set up an All-Ireland semi-final clash with Mayo next Saturday, while the Red Hands will face Kerry a day later, also at Croke Park. If Gavin was extolling a handful of fringe players to put their hands up, he received a resounding response from Sean Bugler, who laid on a terrific performance in the All-Ireland champions’ attack, his workrate terrific, creativity impressive and finishing of the highest order as he claimed three points.

Mickey Harte’s decision to go with a second string team not only helped him keep his powder dry ahead of a possible re-match with the Dubs in the All-Ireland final, but highlighted the failings of the Super 8s system, with both concluding games in this group played out with no significant consequence.

Harte did include established players Padraig Hampsey, Tiarnan McCann and Richie Donnelly, but significantly, the trio have recently returned from injury and required game time.

Donnelly picked up a knock, as did Michael Cassidy, but both are expected to be fit for next weekend’s last four clash with the Kingdom.

And while Jim Gavin fielded a formidable side, he too held much of his heavy artillery in reserve, naming a side with eight changes from the side that beat Roscommon, before shaking it up again shortly before throw-in, with six further switches, including a start for Diarmuid Connolly and a first Championship appearance for the Dubs since the 2017 All-Ireland final. 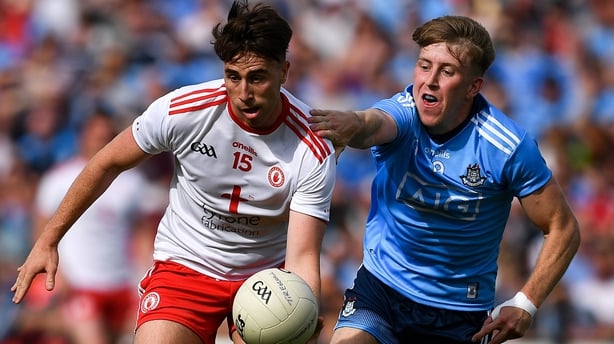 Connolly, operating around midfield, wasted no time in showing his enduring class with accurate distribution creating scoring opportunities, but it was clear from an early stage that the levels of intensity were well short of what these sides had pushed to in previous Championship clashes.

However, with many players on each side playing for places as the series moves towards its penultimate stage next weekend, the big Healy Park crowd was not left with the non-event that many had feared from a dead rubber encounter.

Cormac Costello, one man who has every right to feel he has already done enough to win over manager Jim Gavin this season, struck accurately from placed balls, and a fine score from play gave him a five points first half haul.

After he had pushed his side into a 0-4 to 0-2 lead, another threaded pass from Connolly sent Sean Buglers in to stretch the lead at the end of the opening quarter.

But another Dublin returnee, Rory O’Carroll, was struggling to shake off the rustiness developed through years of absence, misjudging Richie Donnelly’s long ball as Connor McAliskey slipped in behind, but Evan Comerford came to the rescue with a smart save.

Tyrone 'keeper Benny Gallen also kept his side in it with an important stop from Costello, after Donnelly had hit a couple of long range scores for the home side. 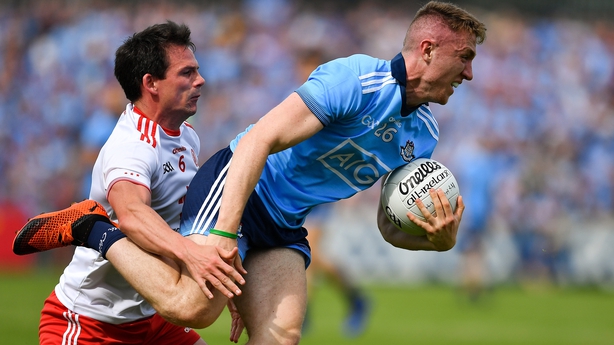 But Jonny Cooper’s assuredness in the tackle was a major reason for his side’s defensive resilience as they restricted the home side to just five first half points.

Costello’s fifth sent the All-Ireland champions in with a 0-8 to 0-5 interval lead, and Kevin McManamon, an elusive and creative force

throughout the first half, deservedly got his name on the score-sheet within ten seconds of the restart.

Managers Harte and Gavin ran the benches as they gave more players opportunities to push their way into next weekend’s match-day squads, with another couple of veterans, Bernard Brogan and Eoghan O’Gara, coming into the Dublin attack.

Gallen once again came to the rescue as Costello got a shot away, and Tyrone also had a goal chance when Conall McCann wriggled free of a couple of defenders to rattle an effort off the crossbar.

It was Bugler who crossed for the only goal of the game as well, palmed home by O’Gara in stoppage time as the Dubs made it three wins from three in the quarter-final series.

Connolly’s game ended a few minutes from the final whistle on a black card. 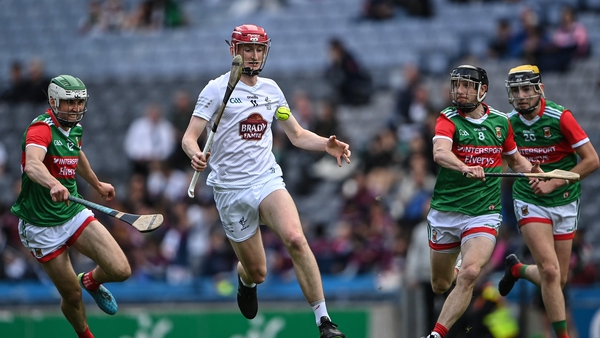 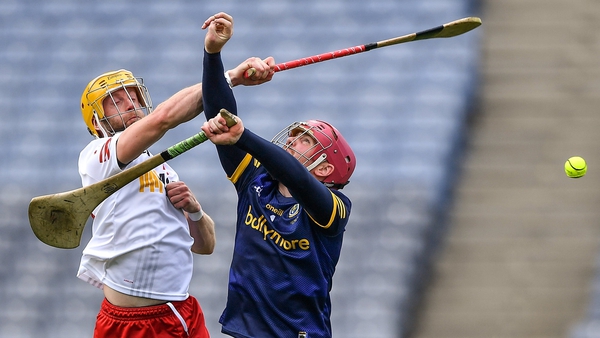