Niamh Cotter led the way as Cork beat Tyrone to bounce back from last weekend's shock defeat to Armagh and advance to the TG4 All-Ireland SFC semi-finals.

Cork had the issue wrapped up when they led by 3-8 to 1-3 ahead at half-time after goals from Eimear Scally, Eimear Kiely and Cotter. Doireann O’Sullivan added two more goals on the resumption as Cork cruised into the final four.

Ephie Fitzgerald’s side were expected to respond after last week’s surprise loss and last year’s runners-up didn’t disappoint at Duggan Park in Ballinasloe.

Tyrone had the aid of a slight breeze in the opening half but Cork, despite shooting seven wides, still found the net three times and pulled clear after Maeve Mallon’s goal had dragged Tyrone back into the game.

Orla Finn settled Cork when she struck first from a free in the fourth minute before a couple of Chloe McCaffrey points gave Tyrone the lead.

Then Scally scored a point and Libby Coppinger exchanged passes with Doireann O'Sullivan who set up Scally to score the first Cork goal.

Cork were 1-2 to 0-2 ahead in the tenth minute and after an Aoibhinn McHugh effort they scored an unanswered 1-3. 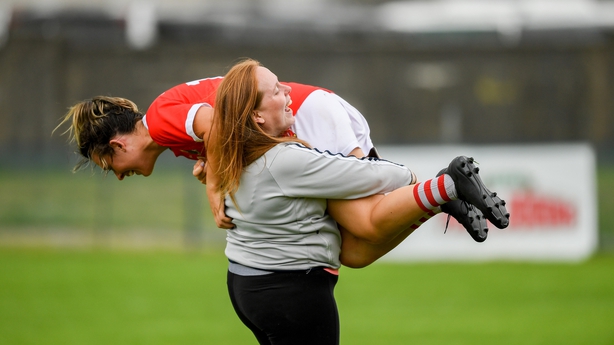 And then Kiely’s speculative effort finished in the top corner of the Tyrone net in the 18th minute.

Scally had a goal disallowed in the 22nd minute and then Mallon looked to have given Tyrone a real chance when she found the net moments later.

But another 1-3 in quick succession gave Cork a huge cushion at the break.

Cotter scored a brilliant individual effort to make it 3-5 to 1-3 in the 31st minute. Cork finished the half off well with points from Doireann and Ciara O’Sullivan, and Finn rounded off the first half scoring.

Cork took a 3-8 to 1-3 lead into the second half and had the breeze to come, and they made their chances pay. Cotter, Finn and Ciara O’Sullivan extended their lead.

Doireann O’Sullivan fired the fourth Cork goal after she was assisted by substitute Saoirse Noonan.

Mallon did score her second goal into the empty Cork net but with 20 minutes remaining Finn gave Cork a 4-12 to 2-3 lead.

Kiely got forward to add another point before she left the field and Doireann O’Sullivan’s second goal came in the 44th minute.

Maria Canavan grabbed a consolation goal for Tyrone but Saoirse Noonan cancelled that out.