They'll talk about this remarkable EirGrid All-Ireland U-20 final success for years to come in Cork, an eight-point win having trailed a rampant Dublin by nine.

After a strong start by Dublin, it was Cork who surged back in dramatic circumstances to secure the silverware in Portlaoise.

First-half goals from Blake Murphy, Mark Cronin and Colm O'Callaghan hauled Cork back and a storming second-half performance lit up by the majesty of Damien Gore propelled them to victory.

Gore scored three second-half points as Keith Ricken's Munster champions turned the screw in a memorable win, the county's 12th at the grade - previously U-21 - and their first since 2009.

Cork, beaten in the 2016 and 2013 finals, were at their very best in the second-half when they held a Dublin side that included the prolific Ciaran Archer to just 0-4, scoring 0-10 themselves.

Dublin finished with 14 players as centre-forward Karl Lynch-Bissett was sent off for his second booking in the 52nd minute.

We probably should have anticipated an epic given that when the sides met in early summer in the development league - also in Portlaoise - it ended in a draw.

That game, by all accounts, was a cracker too and ended 1-18 apiece though, initially, it looked like Dublin might run away with this one. 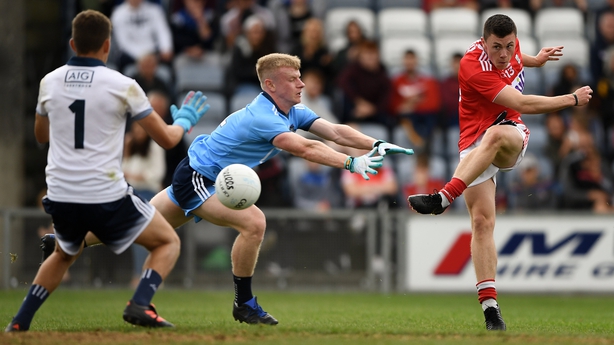 They were that dominant and looked to have returned to the midlands venue armed with a far greater urgency than Cork.

Brian O'Leary kicked the opening score after just 23 seconds and Archer, by far and away the most lethal finisher in the entire championship, added a point 60 seconds later.

Cork looked overwhelmed and fell 0-06 to 0-00 down before Archer swooped for a bizarre opening goal for Dublin.

It came in the 11th minute when the St Maurs man intercepted a short Cork kick-out and though his subsequent left footed shot from the left of goals was weak, it sneaked beneath the 'keeper.

Watch all the Half-Time highlights from an entertaining EirGrid All-Ireland U20 Final here on GAANOW. pic.twitter.com/DQZi7W7vdd

Dublin were in dreamland with a 1-06 to no score lead yet just seven minutes later the teams were somehow level.

It was an emphatic response from Cork whose comeback was kick-started by Murphy's 13th minute goal when he volleyed in from close range.

Cronin added a second goal in the 16th minute when he caught Cathal O'Mahony's long delivery from the left at the far post and slammed home.

And they were remarkably level in the 18th minute when O'Callaghan finished a fine flowing move that involved Brian Hartnett and Daniel O'Connell with a blast from just yards out.

Cork enjoyed a huge vocal support with the county also contesting the earlier All-Ireland U-20 hurling semi-final and their fans raised roared their support.

Now it was Dublin's turn to be shell-shocked though, to their credit, they regroup and the sides were level four times in total before the break. 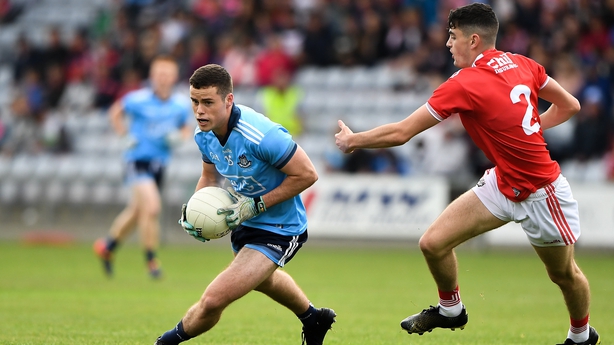 Cork eventually took a two-point lead at the interval as they closed out the half with scores from Gore, O'Mahony and O'Connell to lead 3-06 to 1-10.

Dublin restarted with two points from Archer and Brian O'Leary to level it for the fifth time in the game but it was all downhill from there for Tom Gray's side.

In fact, they were outscored by 0-10 to 0-02 from there on as Cork sizzled with attacking intent and kicked some beautiful scores.

Gore was brilliant in this period while substitutes Jack Murphy and Fionn Herlihy also split the posts for eye-catching scores when they came on.