Armagh held off a powerful final quarter surge by comeback specialists Cork to earn a precious victory in Group 1 of the TG4 All-Ireland SFC  in Tullamore.

Having lost out to Cavan in their opening game of the series a fortnight ago, the Ulster finalists were rank outsiders for this contest.

However, with just 13 minutes remaining on the clock, they established a shock 4-09 to 1-08 buffer and then held out to book a place in the quarter-finals.

Cork recorded 2-03 without reply in a tension-filled finale, but it wasn't enough to deny a gallant Orchard side, although they still qualify as group leaders.

It was also a special day for the four Marley sisters who started for Armagh with Sarah, Niamh, Caoimhe (Morgan) and Catherine playing key roles in a famous win.

Armagh kept in touch as the play progressed with Blaithin and Aimee Mackin finding the target either side of a Doireann O'Sullivan point.

O’Sullivan, now fully recovered from a recent back injury, added a two-point salvo to give Cork some daylight.

But an Aimee Mackin free ensured Armagh were just four points adrift at 1-05 to 0-04 at the interval.

While Ciara O’Sullivan’s sin-binning left the Ulster outfit with a numerical advantage on the restart, they were forced to replace attacking lynchpin Aimee Mackin through injury. 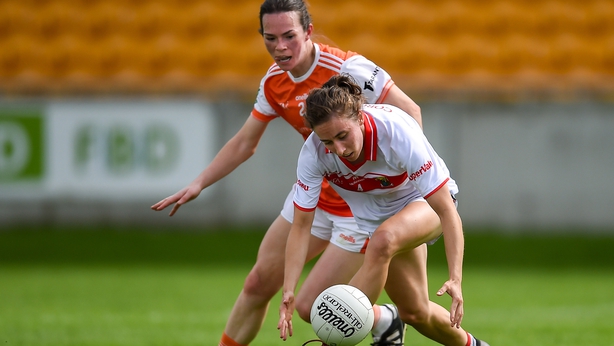 Midfielder Caroline O'Hanlon blasted to the roof of the net and quickly followed with a left-footed point to move Armagh ahead for the first time.

Their incredible turnaround continued when Blaithin Mackin bagged a superb individual goal and then Kelly Mallon and Mairead Watters also found the net in a blistering spell to open up an astonishing 10-point lead on 47 minutes.

The indomitable spirit of this Cork side was on display in the remaining moments, however, as they hit back.

Maire O’Callaghan and Libby Coppinger both found the net to dramatically reduce the Leeside deficit, while points for Finn and substitute Eimear Scally and Doireann O’Sullivan’s fifth of the afternoon cut the gap to the minimum.

Another famous Cork comeback appeared on the cards at this stage, but Armagh dug deep in an exciting finish to claim the win and a place in the quarter-finals.