The stand-out fixture of the weekend in the TG4 All-Ireland Senior Championship sees Donegal up against Mayo on Saturday in a do-or-die Group 4 fixture.

The table is beautifully poised, with Mayo and Tyrone both on three points, while pointless Donegal know they must win by four points or more to guarantee a quarter-final slot.

From the team that suffered defeat against Ulster rivals Tyrone in their group opener, provincial champions Donegal have made two changes, with Kate Keeney and Shannon McGroddy coming in for Niamh McLaughlin and Megan Ryan.

There are also two changes on the Mayo team, as Peter Leahy has named Dayna Finn and Fiona Doherty in his starting line-up, with the pair replacing Kathryn Sullivan and Roisin Durkin.

A three-point win for Donegal would see all three teams in the group locked together on three points and on a scoring difference of zero, which would result in a play-off situation.

A four-point win or greater for Donegal will see them through along with Tyrone, while Mayo would be eliminated on scoring difference.

If Donegal beat Mayo by less than three points, they will still be knocked out on scoring difference, with the head-to-head rule only coming into play if two teams are level in the standings.

In the second game on the TG4 double-bill, which will be shown live on the Spórt TG4 YouTube page (3.15pm), Armagh have it all to do as they tackle Cork. 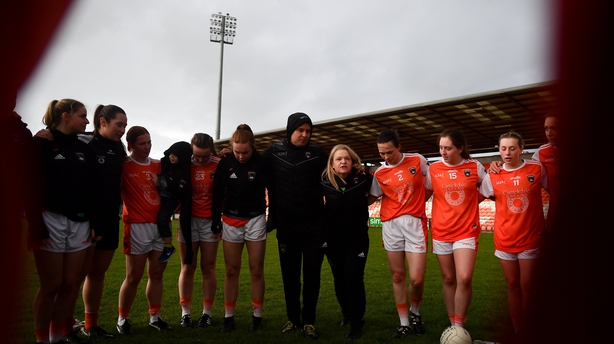 The Orchard suffered a heart-breaking one-point loss to Cavan, who then lost out to the Rebelettes by 20 points.

An victory for the Ulster side would see them through alongside Cork on scoring difference, unless there's a huge margin between the sides, and the Orchard County are boosted by the return of Northern Ireland netball star Caroline O’Hanlon to their starting line-up.

The former TG4 All Star’s comeback is one of five changes in personnel from the team that started against Cavan, with goalkeeper Anna Carr, Megan Sheridan, Colleen McKenna and Catherine Marley also handed starts.

Also on Saturday, champions Dublin will progress to the quarter-finals barring a major upset, and by a large deficit, at home to Monaghan (Parnell Park, 2pm).

The Dubs are unchanged against a Monaghan side that look set for a relegation battle.

The visiting Farney County have made two changes to the team that conceded 7-19 against Waterford, with Rosemary Courtney and Casey Treanor replacing Karla Lambe and Noeleen McGuirk.

On Sunday, it’s a winner-takes-all clash in Group 3, as Kerry and Westmeath lock horns at Fitzgerald Stadium in Killarney.

Both sides have lost to already-qualified Galway, but second place is still up for grabs.

There are two changes in the Kingdom defence, with Julie O’Sullivan and Eilis Lynch drafted in ahead of Laoise Coghlan and Ciara O’Brien.

Westmeath are unchanged as they prepare to make the trip south for a pivotal tie.