Laois, appearing at this stage for the first time in 40 years, were applauded off the field by their own supporters and their victorious opponents after a battling display.

Speaking to The Sunday Game on RTÉ 2 after the game, Sheedy said Laois deserved most of the plaudits from this afternoon but insisted he was content to be in an All-Ireland semi-final, regardless of the scoreline.

"We looked to be in a bit of a flow. We went eight points clear and I thought we'd push on. But full credit to Laois, they came right back. We'd a defensive lapse and the ball ended up in our net. We went in four ahead at half time.

Liam Sheedy says Laois deserve most of the plaudits today but says his team are where they want to be in the semi-final pic.twitter.com/qxaXCX4Dpw

"In the second half, we went seven points up and built ourselves a bit of a cushion. But obviously, the man (Aaron Dunphy) being sent off was a big moment.

"You'd have to say full credit to Laois, they were very, very admirable in terms of how they approached that match. That was their third week in a row. They deserve probably most of the plaudits today. But for us it was jumping that hurdle and taking that step that gets us back to the last four of the All-Ireland series." 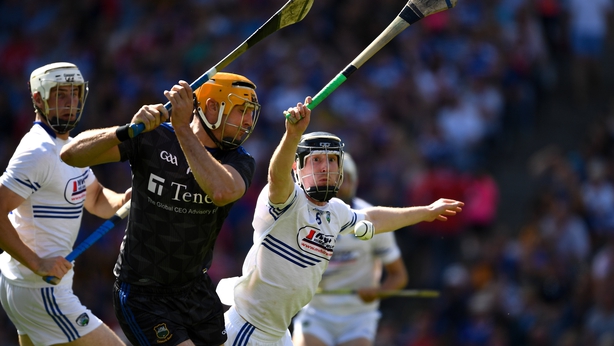 The win was Tipperary's first time back on the horse since their emphatic loss to Limerick in the Munster final and the manager said the Gaelic Grounds defeat had set his team back mentally.

He stressed (twice) that Wexford would have to be considered 'raging hot favourites' for the semi-final meeting in two weeks time.

"We're just delighted to be in an All-Ireland semi-final. That was where we wanted to be at the start of the year. We ended up going the back route. Losing the Munster final did take a little bit out of us mentally. It knocked us back a bit. So, we're delighted to have gotten over that hurdle today.

"Wexford certainly won't be quaking in their boots with what they've seen out there today. They will be raging hot favourites. But we're exactly where we want to be and are looking forward to coming back here in two weeks time.

"As I said, they'll be raging hot favourites. They played really, really well in the Leinster final. It will be a super crowd. They (Wexford) travel in great numbers. So, we're looking forward to getting the Tipperary support out and getting back in two weeks time."