Tracey Leonard fired goals in each half as Galway claimed their third TG4 Connacht Ladies SFC title in a row, but they needed to fend off a strong Mayo comeback to claim the victory

This is Galway's seventh provincial win in the last eight years, but Mayo never hit the heights of the performance they delivered in the drawn game at MacHale Park.

Tracey Leonard and Megan Glynn scored two goals in four first-half minutes, while late points from Tracey Leonard and Lucy Hannon ensured they had a straightforward run to victory on a day that only one Mayo forward scored from open play.

After the drawn game between the teams the general consensus was that Galway had more room for improvement and that was displayed in their dominant first-half performance in Limerick.

It was Peter Leahy's side that opened the scoring thanks to a Sarah Rowe free inside the first minute, but it didn’t take Tracey Leonard long to level matters following a foul on Louise Ward.

Rachel Kearns was a destructive force in the drawn game and consequently Sarah Lynch was given more protection by the sweeping of Barbara Hannon in this game, and as a result she didn’t impact play as often.

After Kearns and Roisin Leonard both kicked long range frees off the ground for their sides, the key moment of the half arrived in the 17th minute when Tracey Leonard exchanged passes with Louise Ward and rattled the net with a cool finish.

Straight away Roisin Leonard added a point for Galway to put them 1-3 to 0-2 ahead, and nine minutes from the interval they pulled seven points clear when a move involving the two Leonards and Charlotte Cooney was finished to the net by Glynn. 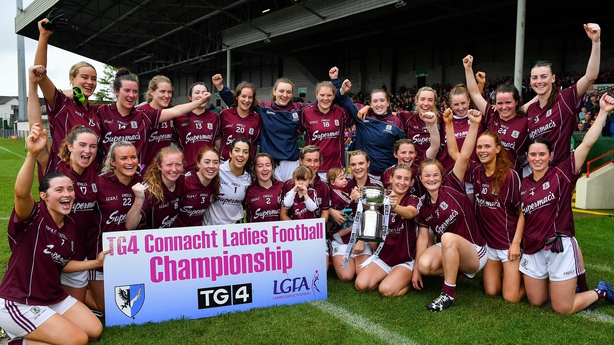 At that stage Galway had also accumulated six wides during their totally dominance, but Mayo punished them for their wastefulness by scoring the last three points of the half to reduce Galway’s lead to four points at half-time, 2-3 to 0-5.

Indeed it could have been a lot tighter, but Rowe was denied by a brilliant Lisa Murphy save when the Kilmoremoy player crept in behind the Galway cover just before the half-time hooter.

Mayo got off to a great start in the second half when Clodagh McManamon pointed on the run after the restart, and the gap was trimmed to two points by the 41st minute with Sinead Cafferky and Grace Kelly on target.

It appeared as if Mayo were on the way to completing a memorable comeback, but some Tracey Leonard magic turned the game back in her side’s favour in the 42nd minute. Following a mazy run her shot was brilliantly saved, but following a brief scramble she kicked to the net after a Mayo defender lost possession again.

That goal killed Mayo’s challenge and despite Grace Kelly keeping them in touch with a couple of frees, there was no reeling in Galway this time.