By Michael Glennon at O'Connor Park

Wexford's quest for a provincial clean sweep is still on course after victory over Offaly in the Bord Gais Energy Leinster Under-20 Hurling Championship semi-final.

With their minors and seniors taking provincial honours on Sunday, the Under-20s were pushed all the way by a valiant Offaly side, who were within a point going into added time.

Having beaten Westmeath, Carlow and Dublin on the road, Offaly had a build a fine run of form but couldn't get past a sharp Wexford outfit.

Half-forward Ross Banville was the go-to man for the visitors, who had ten different scorers, and progress to a final against either Kilkenny or Galway who meet tomorrow at the same venue.

The start was delayed by 15 minutes as a crowd of 5,172 thronged into Bord na Mona O'Connor Park on a beautiful summer evening in the midlands.

And referee David Hughes even had to contend with a pre-match scuffle as players clashed while changing ends before the throw-in.

The game was only 11 seconds old when Barry Kealey pointed for Offaly but that would be their only lead of the hour.

Sean Keane Carroll and Banville soon shared four points for the visitors before an alert Conall Clancy took advantage of a quick sideline ball to smash home from an acute angle for the game's opening goal in the 13th minute. 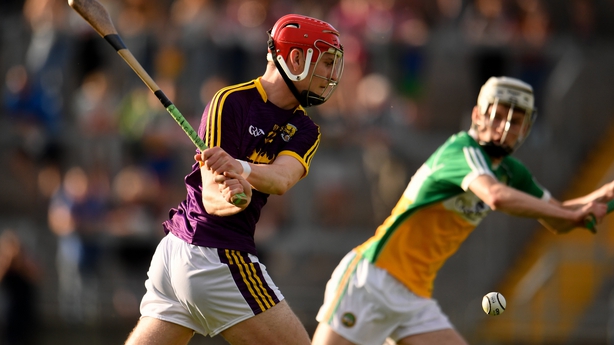 Cathal Kiely, who scored 20 points in last week's win over Dublin, was keeping the hosts in it and landed four frees in the opening period, with Conor Langton and Brian Duignan chipping in with fine efforts from play.

But MJ Reck's side, on their first outing after getting a bye to this stage courtesy of getting to the final last season, were good value for a 1-08 to 0-07 advantage at the break and could even afford nine wides for their four-point lead.

Again it was Offaly who struck first at the start of the second half but Wexford fired over four quick-fire points to maintain their cushion, with Banville, who finished with ten points, deadly accurate from placed balls.

Jack Reck and Clancy added points and all of a sudden the Yellow Bellies' lead was out to six and Offaly needed a goal.

They never looked like cutting through the Wexford defence but when goalkeeper James Lawlor misjudged John Murphy's point attempt from the sideline, Offaly had their major, and the crowd sensed something more.

Wexford should have closed it out soon after but Eamonn Cleary in the Offaly goal somehow stopped Sean O'Connor's close-range effort.

Captain David Nally added two frees and Murphy another point to leave just one between the teams but when Offaly needed cool heads it was Wexford who pushed on with Diarmuid Doyle finding the far corner of the goal to seal the game in stoppage time.