Man of the match Rory O'Connor says the draw against Galway in the Leinster round-robin was the turning point in Wexford's campaign, after they claimed a first Leinster title in 15 years on Sunday.

In a tit-for-tat game, Mark Fanning's late penalty was the crucial score in a game where the sides were level on new fewer than ten occasions.

Davy Fitzgerald's charges also booked their spot in the All-Ireland semi-final next month.

"At the start of this year, there was a lot of questions asked about us," O'Connor told RTÉ Sport's Damien O'Meara afterwards. "They were saying we were at a crossroads with Davy."

"Davy put it on us this year. He believed in us fully, and it was probably in the dressing room that we didn't back ourselves."

"We said after up in Salthill when we drew with Galway that we could have beaten them. We decided to get a bit of belief in ourselves, and look where it's got us now."

'Davy believed in us fully, and it was probably in the dressing room that we didn't back ourselves' - man of the match Rory O'Connor speaks to RTÉ Sport's @damien_omeara #RTEGAA pic.twitter.com/N8SwyFhzBM

O'Connor chipped in with four points on the day, and he was dragged down for the penalty, as the Yellowbellies overcame their fiercest rivals in the provincial decider for the first time in 22 years.

Following Tipperary's defeat to Limerick in the Munster final, they remain the only unbeaten side left in the Championship.

It completed the perfect day for Wexford, following their first minor provincial success since 1985.

"There’s a real good conveyor belt in Wexford at the moment, and long may it continue. 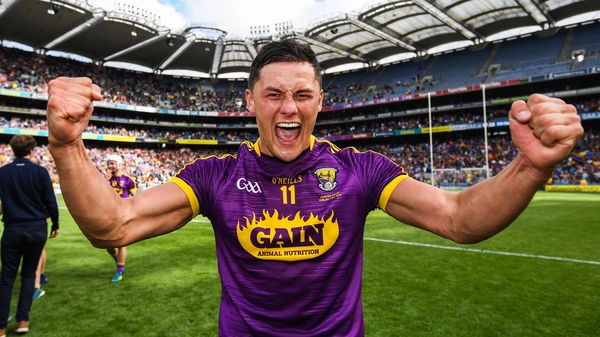