By Dan Bannon at O'Moore Park

Laois bounded their way into Round 4 of the qualifiers with an impressive five-point victory over midland rivals Offaly at O'Moore Park.

The two Kingston brothers struck the ball sweetly all evening long. Donie, top scored with six points and Paul played his able sidekick, with four. Offaly simply hand no answer to their accuracy.

In the opening period the visitors were game and came with spirit and stood tall defensively That fuelled their forwards with confidence and their inside line profited handsomely, but ran out of steam and idea’s late on in the second half.

Laois realigned their targets in the second half, John Sugrue got his side playing with more width and came up with huge turnovers themselves to turn the tables on Offaly.

Both Leinster sides came to the plate with a typical neighbourly fashion, polite to begin with, but as the game wore on the more and more the distain grew. The sides were level seven times in the opening half and the pace was impressively high.

Paul Kingston got the encounter up and running driving into the space and setting the tone to sweetly curl over the bar from the delayed throw in. Bernard Allen failed to convert an early opening but Niall McNamee opened his account his sides account with an advantaged free.

Laois pulled three ahead 0-05 to 0-02, with a Donie Double, only for Offaly to claw their way back into the game with three crafty scores from goalkeeper Paddy Dunican, Ruairí McNamee and Bernard Allen

Again Laois regained their two-point advantage through through veteran Ross Munnelly who was a late inclusion and another Paul Kingston arcing beauty.

The Faithful made numerous blocks and as the palms stung they went a point up through white flags from Niall Mcnamee, Allen and a fine Anton Sullivan effort.

Donie Kingston levelled with a free and full forward Colm Murphy landed his first, which would have been harsh on Offaly to go in behind at the turn, but such was their doggedness at this stage Niall NcNamee did point to make it 0-10 each at the break

On the resumption, Paul Kingston started with a score and ignited a dominant third quarter for the hosts.

Paddy Dunican did land another free, his placed efforts the depth of Offaly's creativity.

Laois boss John Sugrue ran the bench and Evan O’Carroll and Eoin Lowry again came up trumps with three points between them. Dunican landed his third but the air of inevitability grew in the terraces and one centre back Robert Piggott came up the field to fire over from long range the Offaly supporters exodus began. 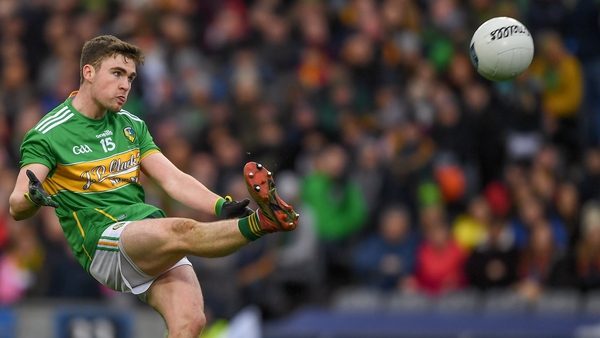