Donegal retained the Ulster title and moved into the All-Ireland Super 8s without Cavan laying a glove on them in a disappointing final in Clones.

In their first provincial decider in 18 years, and chasing their first crown in 22, Cavan simply didn't show up until it was too late.

They trailed by eight at the break and that stretched to nine in the second half. With quarter of a  game left they started to play and reeled off three points in-a-row to give their fans hope.

The excitement lasted just a few moments though, the impressive Jamie Brennan putting this one to bed with a goal with just less than an hour played.

Jamie Brennan's long run ends in a goal. Donegal are on the verge of winning the Ulster Football Championship.

Highlights on @rte2 on The Sunday Game from 9:30pm pic.twitter.com/Z2AjAAevW8

On this evidence, they should fancy their chances of making an All-Ireland semi-final. Cavan need just one game to join them in the next stage, though manager Mickey Graham will need all of his renowned powers of motivation and organisation following this disheartening defeat.

They have made great progress in his first year in charge, beating Monaghan and, after a replay, Armagh. Up against this well-drilled machine however, they were dealt a few cold, hard lessons.

They brought a huge crowd to a 28,780 sell-out St Tiernach's Park and many of them were heading for home long before the end.

This game was on life support at the break, Donegal leading 0-13 to 0-05. The gap was just about manageable for Cavan, but what would happen after the break was absolutely key to making this a contest.

Both managers made switches to their advertised teams, which signalled a change of intent from both camps. 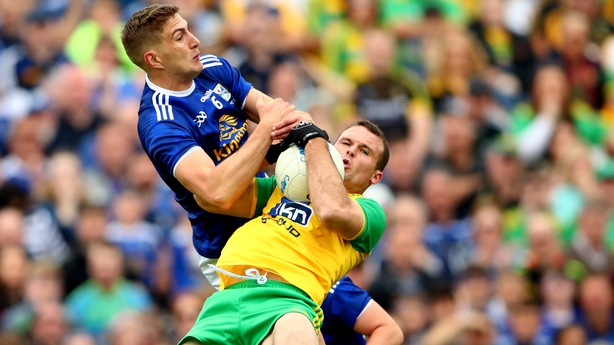 For Cavan there was a refit of the full-forward line with Cian Mackey, Thomas Gallivan and Conor Madden sat down for Cillian Brady, Oisín Pearson and Gerard Smith, presumably aimed at making the team more defensively minded.

And so it was in a first half when Donegal played with the breeze and used it brilliantly. Captain Michael Murphy called a series of long kick-outs on top of himself past his own half-forward line and keeper Shaun Patton was able to find him.

When out of possession Donegal were solid and organised. Cavan couldn’t move the ball quickly enough often enough to catch the reigning champions on the back foot, so more often than not they ended up trying to hand-pass their way through banks of defenders.

It’s no surprise that most of the Breffni Blue’s first half points were top drawer, either scored by an incredible shot from distance or made by a brilliant pass. They had to work extremely hard for what they got.

Cavan could regret moments like this as Donegal take a seven-point lead.

Highlights on @rte2 on The Sunday Game from 9:30pm #rtegaa pic.twitter.com/5hSmj249bG

Donegal, by contrast were having it all their own way up front, with runners off the shoulder cutting Cavan’s defence apart with ease. They ended the first half with nine different scorers, eight from play. Oisín Pierson was Cavan’s only forward to score from play before the break.

The kick-out was the main battle ground, with Donegal winning six of Cavan’s restarts while losing only one of their own. Breffni keeper and captain Raymond Gallivan couldn’t find his men and this left them swimming against the tide.

When he did find his marks, the next ball to spring the attack didn’t happen quickly enough, allowing Donegal the chance to get men behind the ball. 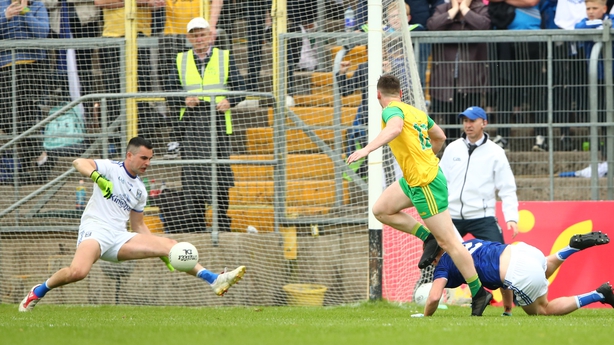 Both sides had goal chances in the first half, Jamie Brennan was blocked and Paddy McGrath shot wide for Donegal while Cavan’s Conor Rehill did well to rescue a poor point effort from team mate Gerard Smith, though under pressure his low effort slid just wide.

The sides were point-for-point after the break before Cavan started to get a proper foothold, Geariod McKiernan leading the fight with Dara McVeety finally getting to grips with the contest.

They got within six points and were on top, meaning a goal would really have sparked this one to life. Brennan was the one to raise the green flag for Donegal though.

Mackey responded in kind for the losers with Stephen Murray getting a consolation goal deep, deep into stoppage time.