By Mike Finnerty at Páirc Esler

A goal seven minutes into the second half from Conor Loftus proved to be crucial as Mayo booked their place in Round 3 of the All-Ireland SFC Qualifiers at Pairc Esler in Newry.

Down produced a battling performance to push the Westerners to the pin of their collar in front of a huge crowd and, had they taken more of their chances, the Mournemen could have been even closer at the end.

Mayo had led at half-time by three points, despite suffering an early blow when the dynamic Caolan Mooney hit the net, and the winners needed Loftus' goal to give them some breathing space when the dust settled.

Ultimately though, the league champions justified their odds-on favouritism as they bounced back from last month’s disappointing Connacht semi-final defeat to Roscommon in Castlebar.

Despite conceding a goal after only eight minutes, and losing full-forward Darren Coen to a black card soon after, Mayo were in front at the end of a breathless first half by 0-10 to 1-03.

James Horan's charges had settled quickly thanks to early points from Loftus (free) and Andy Moran, but Down’s Mooney then pounced for an inspirational goal. 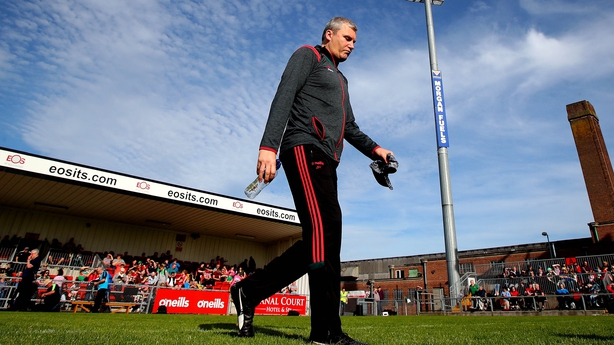 There seemed to be very little danger when the former Australian Rules star picked the ball up, but he used his pace to beat two defenders before knocking the ball nonchalantly past David Clarke.

That score lifted the Down supporters out of their seats, and propelled the underdogs into the lead.

But Mayo’s experience showed from there to the interval as Horan’s side rolled up their sleeves and outscored their hosts by 0-08 to 0-03 over the next 32 minutes.

With Aidan O’Shea at his dominant best around the middle, and line-breakers like Lee Keegan, Colm Boyle and Paddy Durcan getting forward at every opportunity, a plethora of chances were created.

Down were finding it harder to create openings at the other end, and they also squandered a few scoreable chances, but Pat Havern, Owen McCabe and Donal O’Hare (free) did tag on crucial points to keep the home side in the hunt. 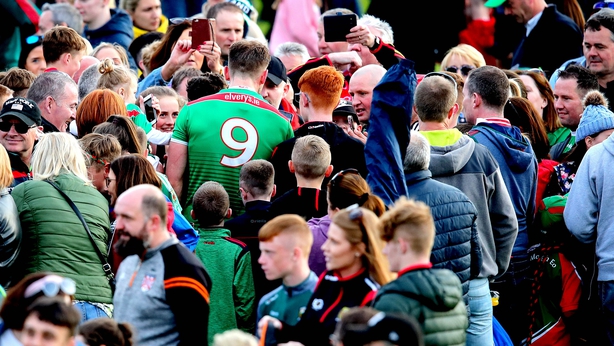 The marauding Keegan and the pacy Mooney then traded scores to maintain the status quo before quick-thinking by Moran set up Loftus for the fourth goal of his Mayo career.

That left the visitors ahead by 1-11 to 1-05 and Down were facing an uphill battle to stay in contention.

There were still six points between the sides swinging into the last quarter but the home side then found their second wind to rattle off scores from Connaire Harrison and substitutes Cory Quinn and Jerome Johnston to cut the deficit in half.

The last ten minutes were a blur as Down attacked in waves and tried to engineer the goal they needed to draw level.

To their credit, Mayo defended excellently with veterans Chris Barrett, Keith Higgins and Boyle all making crucial tackles and interventions.

Down at the other end, a few quick counter-attacks ended with points from Diarmuid O’Connor, the tireless Keegan and Ciaran Treacy to seal a deserved win for the visitors.

Mayo will learn the identity of their opponents in Round 3 next weekend after Monday morning’s draw is made while Down’s season is over after two defeats in three games. 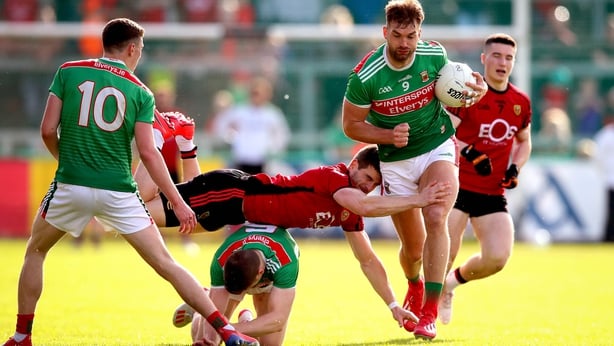