Kildare eased into Round 3 of the All-Ireland Football Championship with a comprehensive victory over Antrim in Belfast.

The double scores victory was just reward for Kildare as they proved way too strong for their Division 4 opposition.

Adam Tyrrell and Neil Flynn both put in huge displays for the victors and they will now look forward to Monday’s draw with plenty of confidence.

Kildare wasted no time in getting acquainted to the picturesque venue of Corrigan Park as they kicked the opening three points of the game with a long-range free from Flynn being followed by two Tyrrell efforts with the Moorefield man's first score coming from a wayward Antrim kickout. 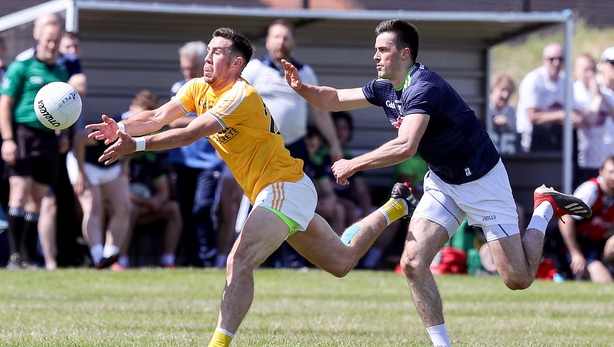 It took nine minutes for Antrim to get on the board but they very nearly found the net when a long ball in the direction of the Kildare square was flicked towards the goal by Stephen Beatty but his attempt went too high.

Patrick McBride looked lively for the Saffrons up front and he soon reduced the gap with a point from a difficult angle.

The sides then interchanged scores with Mick O’Grady getting forward for Kildare with James McAuley responding in kind.

Cian O’Neill’s side did suffer a blow when Chris Healy was black-carded for an apparent third man tackle but with the introduction of Jimmy Hyland Kildare duly scored seven points in a row.

Flynn and Tyrrell were causing pandemonium in the Antrim defence and the two combined for a couple of efforts with Flynn landing three and Tyrrell two in a storming period of football for the visitors.

Kevin Feely was also on target while Keith Cribbin looked on for goal before he had an effort well blocked.

The hosts were staring down the depths of despair but they added on two Conor Murray frees either side of a McBride score. 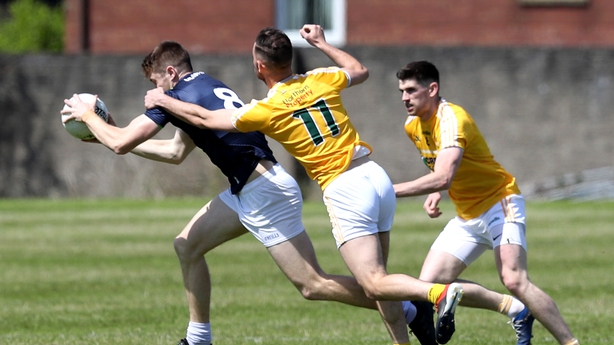 Kildare were well worth their lead though and Flynn and Jimmy Hyland kicked scores before the end of the half as the visitors went into the interval with a 0-13 to 0-06 advantage.

The Ulster side threw out their rather defensive tactics at the start of the second half and it worked briefly with points from Murray and Matthew Fitzpatrick.

A goal is what the northeners needed, however, and unfortunately for them it was their opposition that got it with Fergal Conway firing in a goal minutes after Flynn and Hyland kicked points.

It was all plain sailing from there for Kildare with Tyrrell, Flynn, Conway and Feely all kicking points at their leisure.

McBride finished with six points for Antrim and they stayed competitive to the end but it was Kildare’s day as subs Tommy Moolick and Jason Gibbons emerged from the bench to put the seal on the 14-point success.

Rossies finish the stronger to see off Kildare