Peter Keane is quite happy to keep his cards close to his chest as he plots Kerry's way through the summer.

The Kingdom boss said he's relatively happy with how things went in the league having taken over from Eamonn Fitzmaurice - "a few things worked for us, a few things didn't" - but he's also acutely aware that both he and his side will only be judged when this Championship goes up a gear in the coming weeks.

Keane managed the county's minors to their fifth All-Ireland in a row in the grade last September, his achievements earning him an elevation into the top job last October.

The Cahersiveen man may be reluctant to say it, but his mission is surely to stop Dublin doing their own five-in-a-row at senior level this year, thus trumping the Kerry classes of 1929-32 and 1978-81.

The only thing on Keane's mind right now is Saturday night's Munster final against Cork in Páirc Uí Chaoimh, though he did reflect on the greater demands of his new post ahead of that showdown.

"The step up [from the minors] was something we were looking forward to," he told RTÉ.

"There's obviously a bigger workload. A lot of these players have been around the scene before whereas with the minors you're bringing new players through every year so you probably need to give a little bit more guidance to them. In this situation, the players are nearly guiding us through it!

"I'm lucky with the management team I have - we share the load pretty equally around. You're busy, but you wouldn't be in this job unless you were prepared to put the time into it.

"In some respects I'm lucky I'm self-employed which helps you move different shifts around and stuff like that and my wife Siobhan would help out a lot in the shop. That probably makes it a bit easier." 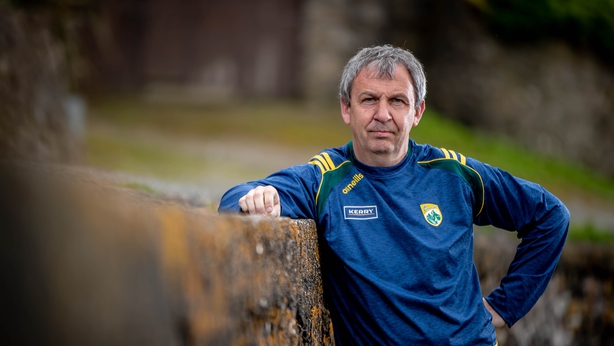 Kerry topped Division 1 of the Allianz Football League before losing to Mayo in the decider.

They returned to competitive action against Clare in the Munster semi-final at the start of the month, a game they won without ever catching fire. Keane says his youthful side still have a lot to prove.

"We had a fairly intensive league throughout January, February and March," he added.

"We're not worried about any All-Ireland at this moment in time. We're only worried about the Munster final. We have a lot of young players. This is why the question remains to be answered as to what way that will go, and whether these fellahs are ready for the step up.

"We've had a lot of success in Kerry over the last number of years with minor teams. Can we bring that through? That remains the six million dollar question at this point.

"The important thing is to come out with a win. That would be the best secret weapon we could have."

As for the debate around the scrapping of provincial championships, Keane was coy.

"The provincial championship is something we've all grown up with. I know there's some talk about a [second] tier, but that's something that remains to be seen. At this moment in time it's there and we're looking forward to it.

"We're going into our second game at the weekend where some teams have four games played already. Is that equal? Maybe not. But it is what it is."

Follow Cork v Kerry this Saturday from 7pm via our live blogs on RTÉ.ie/sport and the News Now app, listen to live national commentary on RTÉ Radio 1 and RTÉ Raidio na Gaeltachta and watch live TV coverage on RTÉ2 and RTÉ Player