Looney’s return, in place of Clare O’Shea, is the only change in personnel from the recent victory over Kerry, as Cork aim to retain their provincial crown.

Cork have already beaten Waterford in this year’s Munster Championship, by 24 points in the round-robin phase, but the Déise will hope to close the gap on the Lidl NFL Division 1 Champions.

That previous game against Cork was Waterford’s last competitive outing and there are three changes to Ciaran Curran’s starting team.

Sunday’s fixture will be streamed live on the LGFA’s Facebook Page, with Jerome Quinn on commentary alongside Kerry captain Amanda Brosnan.

Coverage gets under way at 6.15pm.

There’s also TG4 Senior Championship action on Saturday, when holders Donegal and Cavan battle it out for the right to play Armagh in the Ulster final. 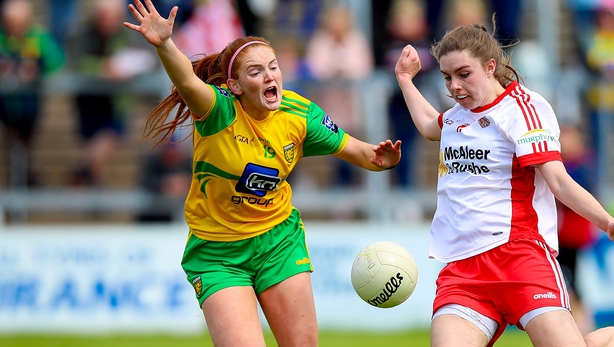 There’s one change on the Donegal team that beat Tyrone in the Preliminary round, with Shannon McLaughlin (above) coming in at corner back in place of Roisin Rogers.

McLaughlin replaced Rogers at half-time in the Tyrone game, as Donegal advanced to face Cavan at Killyclogher (7pm).

The reshuffled team for Saturday’s clash with Donegal shows three changes from the starting 15 that lined out against the Déise, with Kate McIntyre, Rachel Doonan and Sheila Reilly named in a new-look full-back line.

They come in for Shanise Fitzsimons, Mona Sheridan and Geraldine Sheridan, who started against Waterford.

Mona Sheridan lined out in the half-back line in Cavan’s previous outing, while Fitzsimons and Geraldine Sheridan played in attack.

Before that, at 5pm and also at Tyrone venue Killyclogher, holders Derry face Antrim in the Ulster Junior Championship semi-final, with the winners to face Fermanagh in the final on 30 June.

Fermanagh beat Antrim last weekend but the Saffrons have a second bite of the cherry when the face off against the Oak Leaf County.

Returning to Sunday, and Tipperary will meet Clare in the TG4 Intermediate final at 12pm in Cappamore, Co. Limerick.

And there are two semi-finals down for decision in the TG4 Leinster Intermediate Championship, as Kildare entertain Wexford and Meath host Wicklow.

Kildare have home advantage at St Conleth’s Park while Meath will roll out the welcome mat for Wicklow at Páirc Tailteann in Navan.

Both of those games get under way at 2pm, and the winners will advance to the final at Netwatch Cullen Park, Carlow, on 30 June.