WEATHER
A few heavy showers in places during the afternoon, but most should be light and fairly well scattered, with some reasonable amounts of sunshine at times too. For more see met.ie

The finalists are all but certain but relegation is still very much up for decision as we enter the final round of fixtures in the Joe McDonagh Cup.

Laois are guaranteed to play in the decider, and a preliminary All-Ireland quarter final, regardless of their result at home to Westmeath.

The Lake County's head-to-head and points difference advantage over Antrim means only a 20+ point defeat, allied to Kerry beating pointless Offaly, could deprive them of a final spot.

In that scenario, the Kingdom could also reach the final instead of Antrim by beating Offaly by 21 points or more. But you would imagine they might settle for any kind of result in Tralee.

The situation is straightforward enough: an Offaly win will take them above Kerry on the head-to-head rule.

A draw or a Kerry win and Offaly will play in the Christy Ring Cup next year, having suffered the ignominy of successive Championship relegations.

The four-time All-Ireland champions will play in Division 2A of the Allianz Hurling League next year in any case. 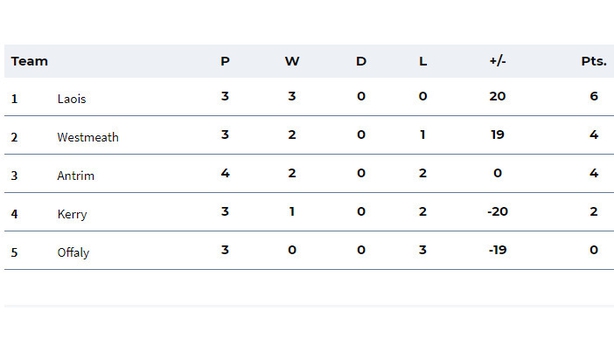 "It’s a big game, big for both teams because neither of us wants to be relegated," Kerry manager Fintan O’Connor told RTÉ Sport ahead of Saturday’s clash at Austin Stack Park, Tralee.

"We were hoping last week that we might beat Laois and be looking at trying to get into the final, but that’s not the case now and this is essentially a relegation play-off.

"None of us wants to be in the Christy Ring Cup and that’s not disrespect because it’s a great competition, but there is a gulf in class there. It’s the same as there’s a gulf in class between the Joe McDonagh and Liam MacCarthy."

Offaly boss Joachim Kelly, appointed to replace Kevin Martin after the first two defeats, is well aware of the scale of the task facing his side.

"This team are down because they’re after losing so many games and it was hard to rise them," he said after taking charge for the loss to Antrim.

"They were nervous out there - they were afraid making mistakes in the first half. We’ll try and resurrect it for the next day."

"It’s a work in progress. We have another two weeks to prepare now for Kerry, which is going to be another dogfight in Tralee and our aim is to avoid going down to the Christy Ring."