Down won their first qualifier game in five seasons after they dispatched Tipperary 1-13 to 1-10 in a delayed round 1 clash in Newry.

Donal O’Hare’s goal in the 59th minute crowned Down’s comeback - they had trailed the contest for the majority as Tipperary played like the team that had competed at a higher level in the league.

However, five points from the Down bench swung the contest, Corey Quinn’s excellent three-point cameo proving a crucial contribution in a six-point turnaround.

Following the game, Liam Kearns announced his resignation after four seasons in charge of Tipperary.

The Kerry native led Tipp to their first All-Ireland semi-final in 81 years in 2016.

Both teams seemed to be operating at half pace early on, Down taking an early lead through Connaire Harrison and Jerome Johnston.

The travelling Tipperary side eventually woke from their slumber with a free from Conor Sweeney and a Philip Austin goal. Austin, a late replacement for Paul Maher, cut right through the Down blanket with an incisive run and a finish to match.

Both sides were happy to conserve energy and hold their defensive shape. It meant scores were at a premium, but Down did level after Goalkeeper Rory Burns landed a 45 and a fine point from Darren O’Hagan.

Tipperary ended the half much the better side with Austin adding a point to his tally and the skilful Sweeney won and landed another free of his own to make it 1-5 to 0-5 at the turnaround. 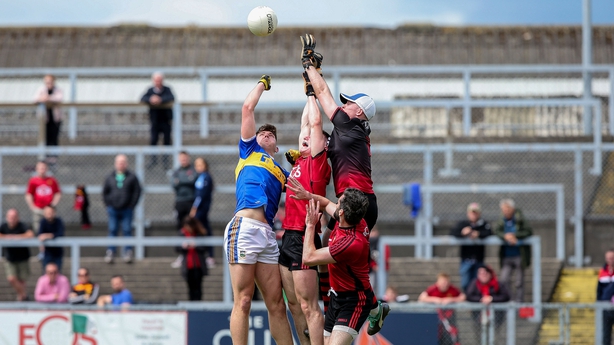 Down came out for the second half in determined fashion, typified by Pat Havern. The Down player, in his debut season, landed two booming efforts as Tipperary tried to manage the game with the cushion of that first-half goal.

They did so with placed kicks from Liam McGrath and Sweeney to keep the scoreboard ticking over, however Down made a double substitution to increase the urgency.

One these replacements, Quinn, worked a treat, landing three scores either side of O’Hare’s major.

The Mourne men were buoyed and clearly fresher and the power surge was completed by fellow substitutes Paul Devlin and Barry O’Hagan to secure Paddy Tally’s team's place in the next round of the Qualifiers.

Fox the match winner as Tipp fight back for away win