James Conlon enjoyed a thrilling full Championship debut with 0-05 at Croke Park as Meath secured a first Leinster SFC final place since 2014 by beating Laois 3-13 to 0-11.

The St Colmcilles man, a goalscorer in the AIB All-Ireland club intermediate final here in 2017, was rewarded with a start after impressing as a sub in Meath's two previous games and didn't disappointment.

Four of his points came in the first-half when the 2010 provincial winners needed a leader after a slow start and his fifth score helped them turn the screw on 2018 finalists Laois in the second-half.

There was another impressive performance from joint-captain Bryan Menton too who helped himself to two goals while Donal Keogan, Meath's other joint-captain, won a penalty that Michael Newman converted.

The big win secures Meath a provincial final date on June 23 but the margin masked a tight game until Andy Mcentee's side pulled decisively clear in the final 20 minutes or so.

Meath came into the contest as favourites after taking out Carlow and Offaly but were wary of their own painful history against Laois.

The reigns of both Seamus 'Banty' McEnaney and Eamonn Barry both ended with defeats to Laois, in 2012 and 2006, while Sean Boylan narrowly survived an infamous 10-point semi-final defeat to Laois in 1985 before inspiring a golden era.

Seamus Lavin opened the scoring for Meath after two minutes but they didn't score again until the 16th minute as Laois dominated the possession at the other end.

Unfortunately for Division 3 finalists Laois they couldn't turn that possession into points and struck four wides before eventually getting off the mark in the 15th minute through Evan O'Carroll.

The Crettyard man scored three first-half points but all came from frees and after booting four wides, including one from a close range free, the big attacker was hauled off after 30 minutes.

Donie Kingston replaced him and immediately showed his class by scoring a point in the 32nd minute.

Laois needed that score because after a slow start Meath grew into the game and scored a 31st minute goal through Bryan Menton that put them 1-05 to 0-05 ahead. 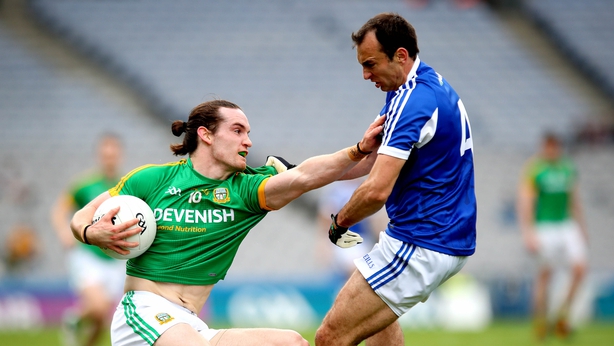 Cillian O'Sullivan did the spade work with a clever run and lay-off to midfielder Menton who cut inside Robert Pigott and fired a low shot beyond the advancing Graham Brody.

O'Sullivan should have scored one himself earlier but blasted just wide after a thrilling solo run through the centre.

Conlon was Meath's key man in the first-half with four points between the 16th and 25th minutes as he continuously got away from Laois captain Stephen Attride to split the posts.

Meath were two points ahead approaching the interval when their second goal arrived.

Newman converted it from the penalty spot after Keogan, who created both of Meath's goals in the win over Carlow, was fouled after a great catch in the danger area.

It left Meath sitting pretty at the interval with a 2-06 to 0-07 advantage though they were worried by Laois' ability to pick holes seeming at will in their defence.

Sub Kingston pulled back two points for Laois immediately after the restart to leave just three in it.

But that was as good as it got for Laois who only added two more points in the entire half, from Kingston again and sub Ross Munnelly.

Meath, meanwhile, began to take over and while they racked up a dozen wides in total they also took enough scores to pull themselves well clear of John Sugrue's side.

O'Sullivan clipped back to back points before Bryan McMahon and Conlon added scores and then Menton hit his third goal in the 61st minute to set the seal on a deserved win.

It was a terrific finish from the Donaghmore-Ashbourne man who hit the top left corner after being fed by sub Shane McEntee.

Ex-captain Graham Reilly then proved his worth again as an impact sub with a fine point as Meath strode 11 points clear by the full-time whistle.