Despite only performing well in patches, Offaly easily secured their passage into Monday morning’s second-round qualifier draw as they accounted for a below-par London side in Tullamore this afternoon.

Bernard Allen was the star of the show for the Faithful County with eleven points, six from play, though it wasn’t until Rúairí McNamee’s goal midway through the second half that home supporters could relax.

Up until that point they were the better side but a huge turnover count, particularly in terms of inaccurate passes, meant they failed to put London away.

Right from the start Allen and Offaly showed their intent as he picked off two points in the first couple of minutes, with Anton Sullivan adding a third as he lofted a 45-metre kick up into the air and let the wind carry it across the bar with plenty to spare.

That lead was wiped out when Killian Butler blasted a low shot beyond Paddy Dunican from 14 metres out to tie up the teams and while Offaly rallied again with three more scores on the spin, they then went 20 minutes – from the 15th to the 35th – without scoring.

There was no shortage of home possession in that time but several poor passes meant that they didn’t trouble the scoreboard, while at the other end a couple of points from Conor Doran reduced the gap to the bare minimum. 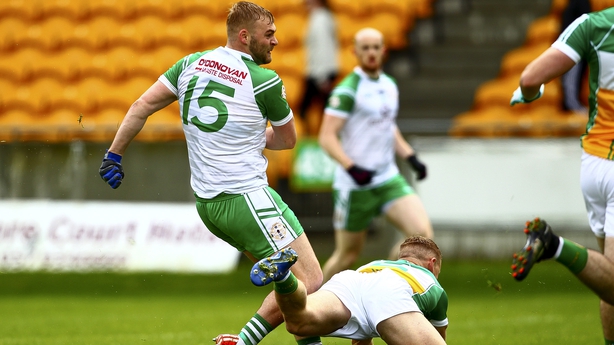 Killian Butler continued to pose a real threat as he showed for ball with power and intent, while Fearghal McMahon also looked capable of doing damage.

With the wind set to blow at their backs in the second half, 0-6 to 1-2 behind would have served London quite well, but instead Offaly found another purple patch in first half injury time with Sullivan, Niall McNamee and Allen (2) all on the mark.

They continued that after half time when Cathal Mangan clipped the ball over the bar from a tight angle and Allen added another brace, the second of which was a superb score from out on the right-hand side off his weaker right foot.

London refused to die and got back to within four points, before Rúairí McNamee’s goal gave them some real breathing room.

Eoin Carroll broke a kick-out to his midfield colleague Peter Cunningham, and a quick transfer of possession through Anton Sullivan left McNamee with an easy finish. 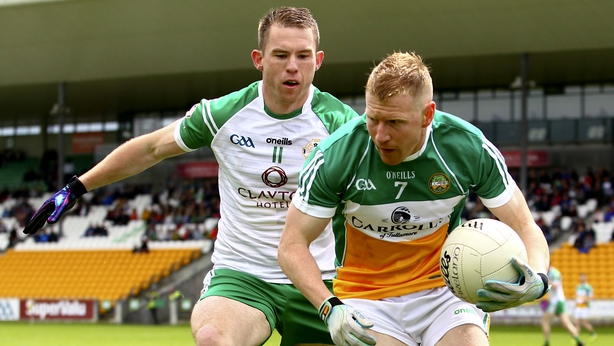 Some impressive scores were kicked in the final quarter by both teams, but the dip in intensity was notable as London were resigned to their fate as the first team to be eliminated from this year’s qualifiers, while Offaly knew that they had safely negotiated this hurdle and would take their place in Monday morning’s second round draw.