A completely different game and a completely different outcome this afternoon in Bord na Móna O’Connor Park in Tullamore as Kildare made light work of Longford in their Leinster SFC quarter-final replay, just seven days after the two sides played out a thrilling encounter at the same venue that ended 3-15 to 1-21 after extra-time.

In the first half of the drawn game, Longford scored 1-08 into the wind.

Today they played with the wind in the first period, didn’t score until the 18th minute, posted just four points by half-time, while five of their starting six forwards didn’t score and the other, Michael Quinn, scored two close-range frees, both in second-half injury-time.

There were holes in Kildare’s game too, but there were also significant positives.

Ben McCormack struck two points of his own but his overall contribution was far greater as he linked up the play superbly, getting on a world of ball and bringing others around him into the match.

Defensively they were very solid. Tommy Moolick offered a physical presence at midfield that shored up a sector that was a problem for them last week, while Neil Flynn responded in the best possible fashion to his poor showing in the draw, coming off the bench to kick five points.

There was a surreal atmosphere in the ground for the first quarter as both sides played hesitant, nervous football that failed to yield a score at either end. Jimmy Hyland was given a start in the Kildare full forward line but he missed a scorable free early on and the ghost of that miss appeared to haunt him as he was generally jittery, fumbling a clear cut goal chance that was set up by McCormack.

Longford had their missed chances too but their inability to connect with their inside forwards was a real problem and it was notable that of their four points in the first half, two were long range scores from play and two were frees.

A McGivney free was their opening score after 17 minutes but immediately they were rocked on their heels when Fergal Conway took possession from the next kick-out, drove at goal and produced a sensational finish that rattled the crossbar before crashing off the turf and into the roof of the net.

Longford tried to work their way back into the game with Donal McElligott and Padraig McCormack leading the way from the back, but the further they went up the field, the more dominant Kildare became. 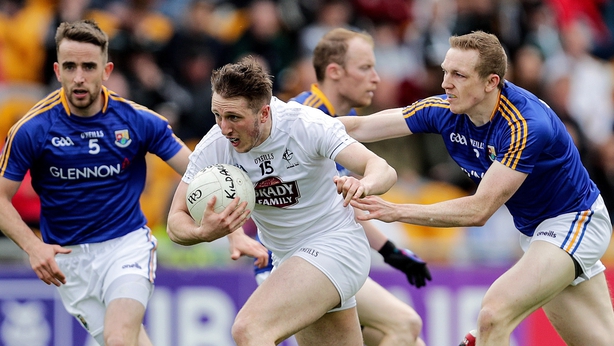 The score of 1-4 to 0-4 at half-time was a bleak landscape for Padraic Davis’ men with a strong, freshening breeze set to blow into their faces in the second half and by the time eight minutes of second half play had passed, their race was run.

Kildare fired over six points in that time through a variety of different attacking approaches, and even at that early stage it was clear that only the margin of victory was in doubt.

Moolick, Fergal Conway, Neil Flynn and David Slattery all picked off some memorable second half points against a Longford side that simply couldn’t recapture the zest of a week before, though it remains to be seen if this comfortable outing against a struggling Longford side will be of much use in advance of the Lily Whites’ trip to Croke Park to face Dublin next Sunday.