Armagh and Cavan will replay their Ulster SFC semi-final next Sunday after finishing level on 1-14 to 0-17 in an extra-time thriller at Clones.

For the second time in the current series, the Orchard men went beyond the 70-minute distance. On this occasion, they failed to finish the job off, but will fight another day for a long-awaited appearance in a provincial final.

They last made it to the Anglo-Celt Cup decider in 2008, but it’s been an even longer wait for Cavan, who haven’t played in an Ulster final since 2001.

A crowd of 16,716 at St Tiernach’s Park was treated to an absorbing contest which was level on 11 occasions, and, in terms of sheer excitement value, more than compensated for what it lacked in quality and invention.

Jarlath Og Burns looked to have swung it in Armagh’s favour with a goal early in the second half of normal time, but veteran Cian Mackey came off the bench to hit two priceless equalisers, first sending an epic to added time, and later to a rematch. 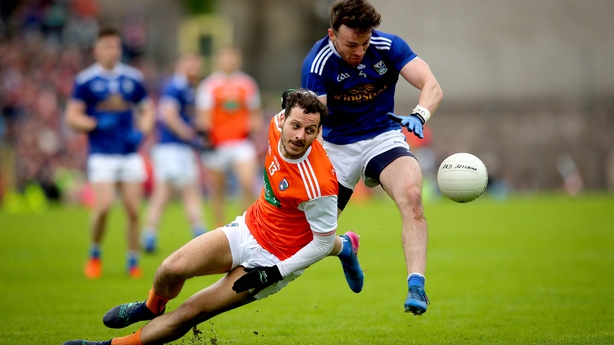 Armagh spurned a golden goal chance early on when Burns ran on to a Mark Shields assist, but drilled his shot low and wide.

They were level on four occasions in the opening quarter, with Armagh finding a way to bypass Cavan’s sweeper system to strike for scores from long range.

Midfielder Burns thumped over a couple of long range efforts, with Rian O’Neill and Aidan Nugent also finding the target for Kieran McGeeney’s side.

Gearoid McKiernan and Niall Murray each converted two frees, but Cavan had to wait until the 17th minute for their first point from play, a superb effort from defender Conor Moynagh.

Martin Reilly, the star of the Breffni win over Monaghan, struggled to break free of the attentions of the tight-marking Aidan Forker, while McKiernan had a terrific tussle around the middle with Niall Grimley, the Cavan man emerging strongly towards the closing stages of the half.

But the Blues lost full back Padraig Faulkner to a 26th minute black card with the scores still deadlocked.

Nothing changed in terms of the closeness of this tactical battle as both sides flooded their own half with bodies when not in possession, and as substitutes Joe McElroy and Christopher Conroy traded points late on, they were level fir a seventh time, 0-7 each at the break.

They were level twice more before Armagh made the big breakthrough with a Burns goal on 50 minutes.

Aidan Forker drove along ball into the path of Jamie Clarke, and who better to spot the run of a supporting player? His perfectly timed assist found the midfielder thundering through the middle, and he buried his shot past Raymond Galligan. 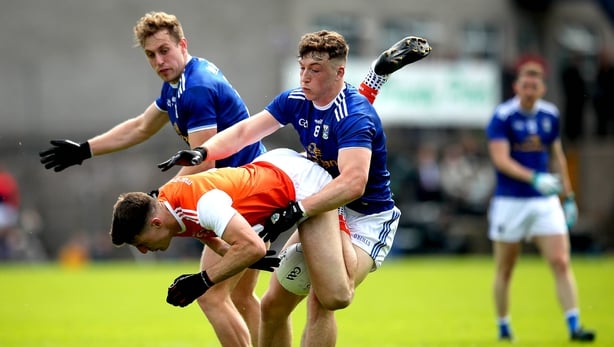 Forker’s majestic long range score made it a four point game, but the Breffni men began to claw their way back with scores from brothers Niall Murray and substitute Stephen.

The Orchard raided for the scores that saw them maintain a three points cushion, before Cian Mackey came off the bench to leave an indelible mark on this game.

Despite the straight red card dismissal of substitute Ciaran Brady, two wonderful points from the veteran attacker inspired his side’s revival, including a stoppage time leveller, and at 1-13 to 0-16, it was on to added time, with Armagh also going down to 14 men, a straight red dismissal for defender Brendan Donaghy.

The first period of extra-time failed to produce a score, but after Stefan Campbell, back in the action after being substituted, fisted the lead point for Armagh, before that man Mackey landed his third to tie it up for the eleventh time.