Cork had 21 points to spare on Limerick as they progressed to the Munster SFC final last night, three early goals laying the platform for victory.

A crowd of 3,128 was present in Páirc Uí Rinn, with the Cork ladies side having booked their Munster final spot with an impressive win over Kerry beforehand.

Limerick had beaten Tipperary – like Cork, relegated from Division 2 of the Allianz FL – in the previous round by seven points but a similar upset here looked unlikely. If they were to surprise Cork, a fast start would be required and they nearly had it from the throw-in.

Midfielder Tommie Childs drove forward and he found Seán McSweeney, whose low shot hit the post and then rebounded back off the diving Cork goalkeeper Mark White before striking the crossbar, with the hosts clearing the danger.

After that scare, they set about taking control. Mark Collins put them in front with a free and a goal soon followed as Ruairí Deane’s pass allowed Brian Hurley to steal a march on the Limerick defence and he produced a good low finish.

That was in the fourth minute and a second goal followed immediately after that, Deane once again the provider as Hurley found the net. 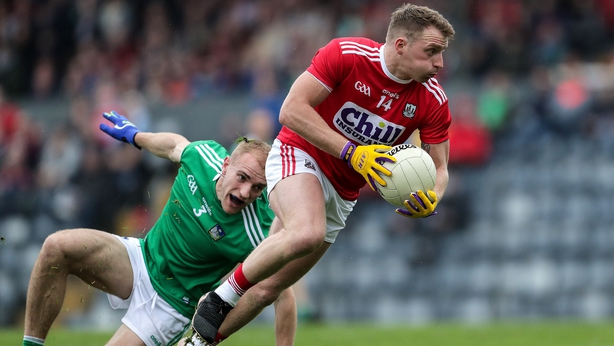 Debutant Eoghan McSweeney, John O’Rourke and Collins extended the lead before Deane, who was outstanding throughout, got the third goal in the 12th minute, McSweeney with the assist.

By the time Paul Kerrigan scored in the 20th minute, all six of the starting Cork forwards has registered, and they could even afford 12 scoreless minutes – with Hurley hitting the post from a penalty – as two Séamus O’Carroll points got Limerick off the mark.

Collins did end the Cork mini-drought to leave it 3-08 to 0-02 at half-time and the same played added three more in the opening stages of the second half.

Understandably, the tempo was lower in the second period as both sides made a raft of changes. Limerick goalkeeper Donal O’Sullivan nailed three long-range dead balls to become his side’s top scorer while Ian Maguire and Matthew Taylor got on the scoresheet for Cork, the latter having his effort tipped over by O’Sullivan.

Sub Stephen Sherlock also registered for the Rebels as the game petered out, with McSweeney having the final say with his third. They now face Kerry in Páirc Uí Chaoimh on June 22.