The draw has been made for Round 1 of the All-Ireland SFC qualifiers, with the pick of the ties being the meeting of Monaghan and Fermanagh.

It's a repeat of last year's Ulster semi-final which the Ernesiders won with a late goal.

Monaghan, after losing their provincial opener, will have to negotiate four games in the back door if they are to reach the Super 8s again.

In the other pairings, the losers of next Sunday's Leinster quarter-final replay between Longford and Kildare will face Carlow.

Louth, after their pasting by Dublin on Saturday, have been drawn against Antrim, while Down take on Liam Kearns' Tipperary.

Watch the full draw for Round 1 of the football qualifiers #rtegaa pic.twitter.com/0q1wqPVZd4

Leitrim, who were promoted from Division 4 in the spring, welcome Wicklow to Carrick-on-Shannon as they look to extend their summer.

Derry, who gave a good account of themselves against Tyrone in the Ulster preliminary round, must make the long journey to Wexford.

The other parings see Offaly against London and Westmeath playing host to Waterford. 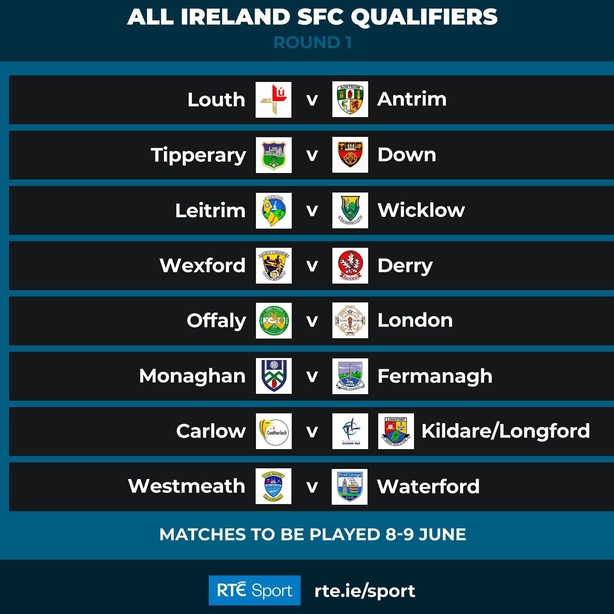 Times, venues and dates will be confirmed by the CCCC on Tuesday.