John Maughan will bring his Offaly footballers to Pairc Tailteann this weekend to face a Meath side he believes are equipped to put it up to the Dubs in the Leinster Championship.

The Faithful County had to fight tooth and nail to stay up in Division 3 of the Allianz Football League over the spring, while a vibrant Meath ended a 13-year exile from the top flight when they sealed promotion from Division 2.

The natives will expect progression to the provincial quarter-finals when Offaly rock up in Navan then, and Maughan is braced for a massive task.

"I haven't been here before [in the Leinster Championship]," the former Clare, Mayo, Roscommon and Fermanagh boss told RTÉ Sport.

"It's a big, big task to play Meath obviously. They have done exceptionally well. They got promoted.

"Offaly on the other hand, we struggled and just about hung on to our Division 3 status. We butchered a couple of games in the league that we felt we possibly could have won. In saying that there is no pressure on us going to Pairc Tailteann. Let's see how it goes.

"Home advantage is crucial. They have a big following being promoted. It seems there's a great buzz about Meath at the moment. I think the Leinster Championship needs that. They might possibly challenge Dublin further down the road.

"It's difficult going away from home, we'd rather the game be in O'Connor Park, that's the way it is."

He steered the Banner County to a memorable Munster SFC crown back in 1992 thanks to a sensational defeat of Kerry but such shocks are in very short supply theses days. The gulf between the smaller counties and the big guns is huge, and threatening to widen further.

"That's a problem," Maughan added. "There's a debate out there about a second-tier competition and that's something that the GAA will possibly look at. I was just talking to Brian Cody about Gaelic football in general and we're going to see a lot of lopsided games throughout the Championship.

"That's not fair on spectators, players and nobody wants to see them ridiculed. I think it's a question of going back to the All-Ireland 'B' Championship that was played a number of years ago.

"I recall winning a 'B' title in 1991 with Clare and look at Clare now [currently operating in Division 2 of the league], not that I'm suggesting it is because of that. But it does kick-start a county.

"It's something that is meaningful. The Division 3 league campaign we played in had teams that were very competitive. It was a bit like Championship football.

"I know the players enjoy that because they are playing teams on a par and I think the GAA will look at a 'B' Championship or a second tier." 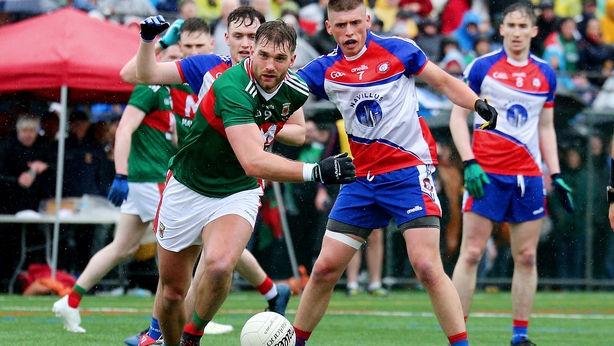 The Crossmolina man has been impressed by Mayo's start to the year. The Green above the Red kicked off their summer with a thumping of New York and bounce into the Championship off their first league success since 2001.

"They had a great league campaign and I didn’t expect that they would win the league," said Maughan.

"It was a pleasant surprise and in the second half of the league final they played particularly well. They have found a few new players like Fionn McDonagh, Matthew Ruane in midfield to bring out the best in Aidan O'Shea.

"James Carr is a super footballer. I'm just a little concerned defensively in the white heat of Championship in August what would Croke Park do to those legs, the likes of Keith [Higgins], Boyler [Colm Boyle], Chris Barrett, they have a lot of miles on the clock.

"In saying that Mayo will be there and they'll bring certain pomp, atmosphere and great crowds like we saw in New York."