The Kilkenny and Leinster champions also have sharp shooters Colin Fennelly and Adrian Mullen on the shortlist for the overall Club Hurler of the Year accolade, where they are joined by Ballygunner marksman Pauric Mahony.

Fennelly hit 2-04 in the St Patrick's Day victory over St Thomas' of Galway.

Another goal for Colin Fennelly for Ballyhale!! pic.twitter.com/4ilLx3x0sj

Pivotal figures Joey Holden and Michael Fennelly, and in form forwards TJ Reid and Eoin Cody are the other Ballyhale representatives on the team announced today, a selection which celebrates outstanding performers in the provincial and All-Ireland stage of the AIB GAA senior club championship.

Munster champions Ballygunner have Philip Mahony honoured for the second year in a row, while goalkeeping star Stephen O’Keeffe, defender Ian Kenny, and midfielder Shane O’Sullivan join Philip’s brother Pauric in the side.

There are five clubs represented in total, with Ruairí Óg Cushendall duo Eoghan Campbell and Neil McManus honoured on the back of their strong campaign.

All-Ireland finalists St Thomas’ have wing-back Fintan Burke included, while there is an award for long-serving Coolderry forward Brian Carroll – a scorer of 2-16 in their Leinster semi-final clash with Ballyboden St Endas.

Corofin duo Gary Sice and Kieran Molloy were joined by Gaoth Dobhair star Kevin Cassidy on the short list for the Club Footballer of the Year award.

Sice and Molloy were monumental figures for the all-conquering Galway champions, who retained their AIB All-Ireland club title in fine style on St Patrick’s Day – a fourth senior All-Ireland for the club in all.

Silke and Farragher were also chosen 12 months ago on what was the inaugural AIB GAA Club Players’ Awards. 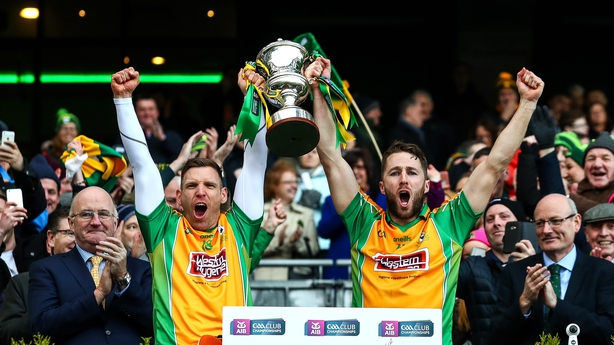 Full-forward Kevin Cassidy was an inspirational presence for Donegal champions Gaoth Dobhair as they went on the march to a first ever Ulster senior title and an epic semi-final joust with Corofin.

The Hurler and Footballer of the Year Awards will be announced on Saturday night at Croke Park and presented by GAA president John Horan.