The Green and Red ended a ten-game run of winless finals at Croke Park today, beating Kerry 3-11 to 1-10 to sit top of the pile in spring for the first time in 18 years.

It's Sam Maguire that the Connacht men really want however, and Horan, who has finally won a national title in his first season back in charge, suggested there would be a big psychological boost from finally getting over the line.

"I think that game today, if we were as effective as we should be, we could have won by 10 to 12 points to be honest. We just about got over the line.

"I’m sure a bit of nerves came into it but to win one is significant for that group, there’s no question about that. It might be a springboard if we use it correctly.

"There are some guys out there who have given 15 years to try and win something significant. I'm absolutely delighted for them today.

"Tom Parsons jumped the fence there at the end, and Ger Caff (Cafferky) and some of these guys who have soldiered for a long time.

"I suppose what’s refreshing for us as well is we used 35 or 36 different players in the league. Nine or ten new players who had never played before. So it was a huge panel effort. That makes it a little bit more special, that it wasn’t just a 15 or 16 – it was a big group." 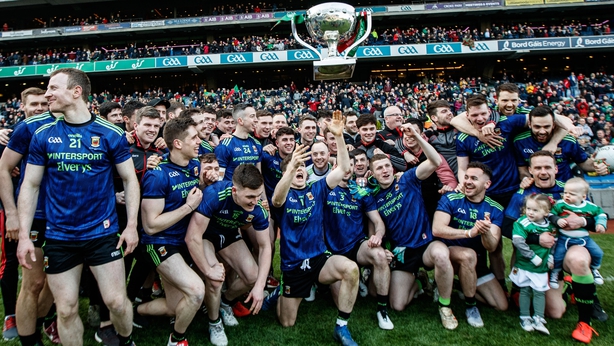 Mayo trailed by four points at half-time 2-03 to 0-05 but dominated after the restart, hitting three goals themselves through Matthew Ruane, Diarmuid O'Connor and Ciaran Tracey.

"The goals we gave away were very slack," said Horan. "They were from two kick-outs – we didn’t press very well from the kick-outs, their midfield was very strong pace-wise, so they opened us up for those. We had four goal chances in the first half, I don’t think we went for any of them.

"We knew there were goals in that game for us and thankfully in the second half we got them.

"There were three or four in a row where we just ran into their cover when a shot was on or an opportunity to recycle, we kept doing some daft things so that was a bit frustrating. But it was very calm at half-time. There was a bit of a breeze there and it does make a difference in how you play. We’d a good idea of what we needed to do, we kept the pressure on.

"At the start of the second half we got scores very quickly and we had four or five waves of attack where we had three or four players and we butchered them. To win it eventually in the end, it’s great for us but, yeah, lots to look at."

Horan expects Cillian O’Connor, Cian Hanley and Seamus O’Shea to play for their clubs next month and isn't ruling out a summer return to action for long-term injury victim Parsons.

He also praised the performance of Rob Hennelly, who was a surprise replacement for David Clarke in goal. Hennelly had a few nervous moments against Kerry but made a crucial save to deny David Clifford a goal late on.

"We’re in a very strong position with our goalkeepers. David Clarke has been excellent in the last few few years.

"We played Dublin here a few weeks ago and were very poor but Rob was the outstanding player on the field that day. He’s on the right track, getting better and better."