Limerick served notice of their summer plans by brushing aside Waterford at Croke Park to win their first Allianz Hurling League title in 22 years.

The Patrickswell man’s 27th-minute goal gave John Kiely’s side a five-point interval advantage – 1-12 to 0-10 – and they kept Waterford at arm’s length throughout a low-intensity second half before piling on the pain in the closing stages.

It was a novel pairing – the first League final between these teams – but one that got old for the Deise long before the final whistle as Limerick laid down an ominous marker for their Championship rivals.

There was an eerie, flat atmosphere for much of the first half, the sparse crowd still filtering in ahead of the football final meaning the players were clearly audible from the top of the stand.

Gillane and Cian Lynch eased Limerick in front but his first free and a point from the corner by Stephen Bennett levelled it up by the sixth minute.

After that, Limerick took over and hit six unanswered scores in as many minutes, Gillane and Hegarty with a pair from play each and a superb sideline cut by Darragh O’Donovan. The Doon man later hit the post with a similar effort from 60 metres.

Waterford had the dazed look of men who had forgotten to put their clocks forward and could have been further behind had keeper Stephen O’Keeffe not bravely blocked a goalbound Gillane shot with his back.

Limerick were dominating possession with their short passing game and repeatedly turning over their opponents but discipline was an issue and three Bennett frees helped to cut the gap to two – 0-08 to 0-06.

The Deise had three men up front but struggled to get the ball to them as the Limerick half-forwards harried every clearance.

Peter Casey sent over a great point from the right sideline and Waterford had to settle for a pointed free when Bennett shrugged off Tom Condon but hit a bobbling shot too close to Nickie Quaid.

Eight minutes before the break, Gillane got on the end of a Tom Morrissey delivery to flick a delightful volley to the net.

Waterford responded with points from Michael ‘Brick’ Walsh and Pauric Mahony to reduce the deficit to two again but Limerick finished with a flourish and further scores from Gillane, Morrissey and Graeme Mulcahy had them 1-12 to 0-10 ahead at the interval.

The Treaty men hit the first three points upon the restart, including a long-range effort from captain Hannon, but Waterford replied with three in a row of their own – Austin Gleeson matching O’Donovan’s skill from the sideline.

Gillane was on fire from play – firing over twice inside the 52nd minute – but had an off-day with the frees, hitting six wides in the second half alone.

It mattered little though as Waterford were offering little other than frees from Pauric Mahony, who had taken over from Stephen Bennett, and the latter held his head in his hands when he fired over the bar from close-range after Sean Finn had misjudged a ball across the endline from Kevin Moran.

A goal then would have made it a three-point game but Limerick punished the miss remorselessly, outscoring their rivals by six points to four in the final 15 minutes.

Gearoid Hegarty and Peter Casey both finished with 0-3 from play and subs Seamus Flanagan and Shane Dowling also got on the scoresheet as Limerick prepared a spot for the Croke Cup beside Liam MacCarthy in their rapidly swelling trophy cabinet - the first time they have held both trophies since 1937.

For Waterford, it’s a disappointing end to what had been a promising league campaign under new manager Pauric Fanning and they will hope to improve for their Munster opener at home to Clare on 12 May. 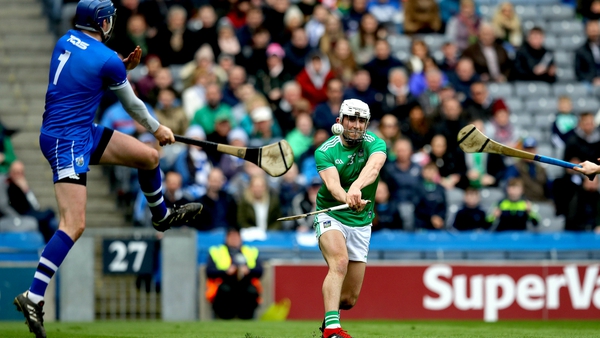