Sunday's Allianz Football League final is a chance for the pretenders to Dublin's All-Ireland throne to lay down an early-season marker.

Kerry have, with their six league wins from seven, shown everyone what they're capable of. Regardless of Sunday's result though, supporters from the Kingdom will remember that claiming this title two years ago proved to be something of a false dawn.

Mayo won five of their regular league games, including an impressive victory in Tralee over this weekend's opponents. But returning manager James Horan knows that his two most significant tests before Championship, against Galway and Dublin, both ended in defeat.

Recent games between the counties have been memorable, and we've picked five of the most significant from down through the years ahead of Sunday's clash at Croke Park.

Current Mayo manager James Horan was on the field that day, and scored what commentator Ger Canning described as a "bizarre goal". His 40-yard strike finished off a Kerry team that was already on the ropes.

The Munster men had an almost immediate response to James Nallen's first-half goal for Mayo. The Westerners' goalkeeper John Madden completely missed a high ball to bring Kerry back into a game in which they were always second best.

It didn't matter, as Maurice Sheridan finished with six points in the game that established the modern rivalry between the counties.

Kerry didn't have to wait long for revenge, and they did it in the game that counts, the final. The 1997 All-Ireland was Maurice Fitzgerald's final, as he contributed 9 points to a 13-point haul for Páidí Ó Sé's side.

This wasn't a classic game by any stretch of the imagination, but it was vitally important for Kerry football. A first All-Ireland title in 11 years, and a first since the great team of the 70s and 80s.

Mayo then went into a period of decline, and they had to watch on as neighbours Galway brought Sam Maguire across the Shannon after two of the next four finals.

Mayo had this drawn All-Ireland semi-final won. They were five points ahead at Croke Park, with less than four minutes to go. But they fell apart from there, and might well have lost the game.

First off, Kieran Donaghy claimed a high David Moran ball, before laying it off to the unmarked James O'Donoghue to bury the effort to the net. Kerry still needed Kieran O'Leary to score the equaliser.

Then, David Moran had the chance to win it with a late, long-distance free. But he dropped the effort short, and referee David Coldrick immediately blew the full-time whistle.

The replay took place, controversially according to some, at the Gaelic Grounds in Limerick. The westerners took an early seven-point lead, after two early goals from Cillian O'Connor.

But it was James Horan's team who needed a late Donal Vaughan equaliser to force extra-time after a brace of second-half penalties had the Kingdom leading going into added time.

The fun didn't stop there, as Kerry edged towards victory, a brawl broke out. Players, and a Mayo maor uisce were involved. Then 'Mayo Mick' arrived, and it took five stewards to get him off the pitch. He couldn't stop Kerry emerging with a three-point win in the final game of James Horan's first spell in charge.

The most recent Championship meeting between the counties was another replay, after Paddy Durcan had rescued Mayo the first day.

The Connacht men needed no such heroics second time around, as Diarmuid O'Connor's first-half goal set them on their way.

Andy Moran's goal shortly after the restart gave Kerry a mountain to climb. And they couldn't get closer than four points, as Mayo booked their place in another All-Ireland final.

Follow the Allianz Football League live blog on RTÉ.ie and the RTÉ News Now App from 3pm on Saturday and 3.30pm on Sunday. Live radio commentary on Saturday Sport and Sunday Sport, Radio 1, from 2pm. Highlights on Allianz League Sunday on RTÉ2 and the RTÉ Player from 9.30pm. 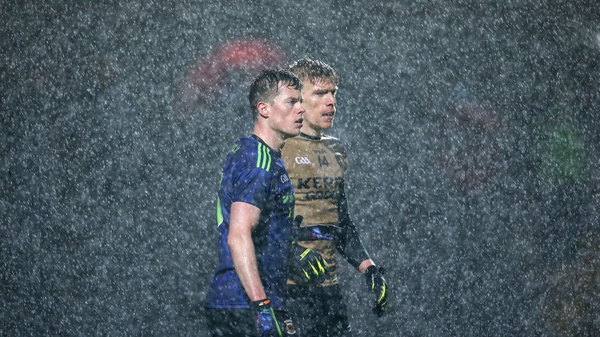