By Brian Flannery at Walsh Park

A Shane Bennett goal in the fifth minute of injury time gave Waterford a dramatic two-point victory over Galway in their Allianz HL Division 1B clash at Walsh Park.

Paraic Fanning’s home side trailed by ten points at the break having endured the harsh elements in in the opening half, in front of the official attendance of 3,371. However Waterford completely dominated a second half in which Galway recorded just two points before Shane Bennett’s match winning goal.

Galway had the benefit of the elements in the opening half but it was the home side who started brightly with the Bennett brothers looking lively in attack. Waterford led 0-5 to 0-3 after seven minutes with Stephen Bennett raising four of these early white flags.

Joe Canning responded with a point and in the 10th minute Jason Flynn slipped his marker to race clear and shoot low past Stephen O’Keeffe, 1-4 to 0-5. Niall Burke added another point for the Tribesmen before Jamie Barron and Stephen Bennett pointed in reply.

With dark clouds encircling the Waterford venue the conditions deteriorated considerable with thunder and lightning preceding heavy hail showers. Galway was now dominating and beginning to make their wind advantage count. Five points in succession from Jason Flynn and a pair each from Joe Canning and Conor Whelan put the visitors six up on the half hour mark. 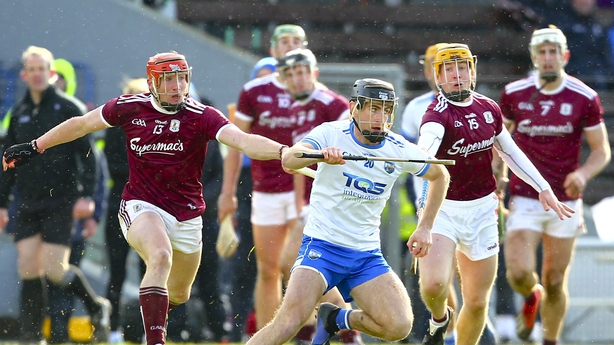 Then Joe Canning careered through the heart of the Waterford defence before placing Brian Concannon who rifled a superb shot to the top corner of the net. Canning pointed another free to send Galway to the dressing rooms leading by ten points, 2-11 to 0-7.

Now wind assisted Waterford quickly set about reeling in their opponents. Eight points on the bounce in the opening fifteen minutes cut the deficit to just two points. Jamie Barron and Kevin Moran were both outstanding with a now subdued Galway side struggling to get the ball past the half-way line.

Joe Canning finally had a second half score for Galway after 55 minutes with Niall Burke and Stephen Bennett swapping points with the game heading to a conclusion. Stephen Bennett nailed two further frees to narrow the margin to the minimum with the result on the line.

Deep in injury time substitute Austin Gleeson glided a pass for Peter Hogan to run on to with the Ballygunner man winning possession and turning his marker in the same movement. Hogan had the confidence to drive towards goal before finding Shane Bennett unmarked to billow the net and secure a victory and top place in Division 1B for Waterford.

Waterford come good in second half to hammer Clare