UL are the Gourmet Food Parlour O’Connor Cup champions for a record 12th time after goals from Fiona McHale and Hannah O’Donoghue saw them power past UCD at Grangegorman.

This was a stunning performance from UL in one of the best games of football so far this year. They defended rigidly, attacked at pace and showed excellent fitness levels to power to the win against the wind in the second-half.

Aine McDonagh kept UCD in touch with six points and substitute Chloe Foxe hit the net with a couple of minutes remaining, but there was no beating UL after this display.

While the wind was not as strong as in the earlier Lynch and Giles Cup finals, UL were certainly assisted by the conditions in the first-half and they got the bright start they needed when Emma Needham pointed in the second minute.

Dearbhaile Beirne drew UCD level after they won some good ruck ball, but UL kicked on when Rebecca Delee pointed from her left half-forward berth and Eimear Scally got in on the act a few minutes later.

The match up of Galway colleagues Louise Ward and McDonagh was an interesting head-to-head and the UCD player closed the gap to one when she pointed from a tight angle after 12 minutes.

All UCD’s points in that first half were very hard earned as the UL defence, expertly marshalled by Laurie Ryan – who stuck to Andrea Murphy diligently – forced plenty of errors by their tight marking and disciplined tackling. 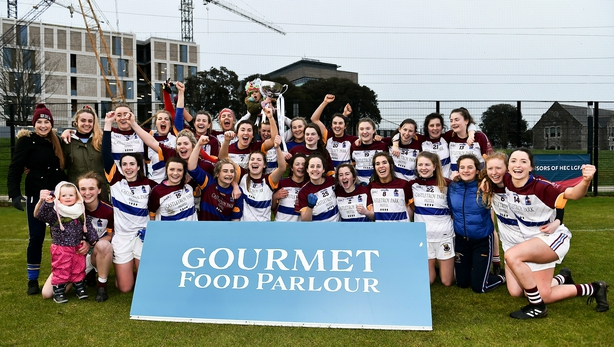 At the other end too the Munster side were beginning to find their top form and frees from Scally and Shauna Howley put them three ahead, before a brilliant break out of defence from Shauna Molloy ended up in the score of the half from O’Donoghue.

McDonagh’s free briefly halted UL’s run, but they scored another three without reply: a Scally free, a Delee point after a good turnover, and another excellent O’Donoghue point when she cut back onto her left.

That run of six of the seven points scored between the 14th and 29th minutes had UL in control, but UCD finished the half strongly and a Caoimhe Mohan point was followed by a huge McDonagh score to leave it 0-9 to 0-5 at half-time.

McDonagh landed another sweet point for UCD straight after the restart, but that three-point deficit was as close as they got to UL, who kicked on brilliantly in the second-half. Scally pointed from play, and although Mohan responded, UL scored the next three points as their incredible fitness started to show.

McDonagh’s fifth point made it 0-13 to 0-8, but midway through the second-half McHale ran on to Roisin Howard’s pass and flicked the ball over Linda Bruggner into the net.

UCD responded well again with points from McDonagh and the rampaging Kate McGrath, but eight minutes from the end O’Donoghue sealed the win when she recovered the rebound from her own shot and found the net for the third time in two games.