By Steven Miller at O'Moore Park

All Ireland champions Limerick have an Allianz Hurling League semi-final to look forward to for the fourth year running following a big win over Laois in O’Moore Park.

Manager John Kiely only started six of last year’s Liam MacCarthy heroes but they still had too much strength for the young home side.

First-half goals from Conor Boylan and Seamus Flanagan set them on their way and while Laois competed as well as they could, the result was never in doubt.

It was a workmanlike performance from Limerick with Barry Murphy their top scorer with eight points.

Laois came into the game on the back of positive outings against Offaly, Carlow and Dublin but this was a big step up. And it told from the start.

The Shannonsiders were stronger and sharper, continuously swallowing Laois up in the tackle and creating space for themselves when they were in possession. 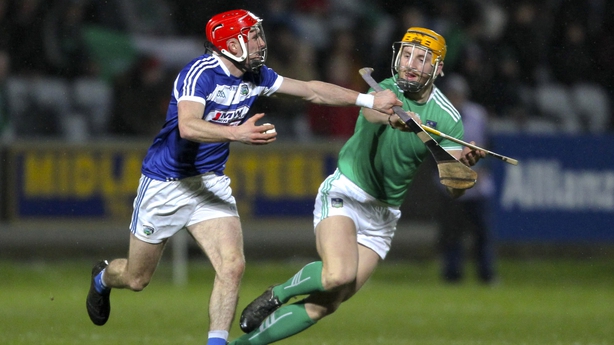 There’s a euphoria around Limerick hurling at the moment and they brought a huge crowd to Portlaoise.

And they had plenty to shout about early on. Barry Murphy and David Dempsey fired over early points and although Lee Cleere responded for Laois, the visitors got their first goal in the fifth minute when Seamus Flanagan fired past Enda Rowland after good work from Gearóid Hegarty.

Peter Casey and captain Declan Hannon followed up with points from play before Murphy added another free. After just ten minutes, Limerick led 1-05 to 0-01.

Laois  grew into the game somewhat with Rowland pointing a long-range free and Mark Kavanagh adding three more but they struggled in front of the posts, hitting 14 wides in total in the opening half.

The Munster side struck for a second goal on the 30-minute mark with Conor Boylan - one of Limerick’s newer faces - finishing smartly. Kavanagh responded with another free but Casey and Hegarty added further points before the break.

At half-time Limerick led 2-11 to 0-06 with all six of their starting forwards on the scoresheet.

Limerick continued to lead the way in the second half with Diarmuid Byrnes (free), Gearoid Hegarty, a sublime Darragh O’Donovan sideline cut and four from Barry Murphy stretching their lead.

Kavanagh, Paddy Purcell, Aaron Dunphy and Jack Kelly pointed for Laois as both sides used their bench but the scoring rate slowed down with Flanagan, Boylan and another Murphy free ensured Limerick had 17 points to spare at the final whistle.

Kiely's men have a two-week break before their semi-final on 23/24 March. They’ll face tougher tests from here on - but they’ve now won four and drawn one of their six league games this year.

Laois now face a wait before their next competitive outing - their Joe McDonagh Cup opener away to Offaly in May.