Westmeath kept their winning run going with a comprehensive 2-12 0-06 win over Mayo. The goals came from Derek McNicholas and Johnny Bermingham as they picked up their fifth consecutive victory.

Kerry are still keeping up the chase in second place, comfortably brushing Meath aside in snowy conditions in Killarney before their footballers took to the field. They will face Westmeath in the Division 2A final.

Third-placed Antrim were also in action today and scored a four-point win against London.

Derry suffered their first defeat of the league campaign against a Wicklow side who they will meet again in the Division 2B decider next weekend.

Derry and Wicklow are the joint leaders in this group, with Eoin MacCormac and Andy O’Brien getting the decisive goals for Wicklow against the Ulster side on Sunday.

Kildare are two points further back on the table following a four-point win over Down at home.

Donegal scored an emphatic 16 point-win over Warwickshire to pick up their first points of the league campaign.

The two sides will meet again next weekend in a relegation play-off to determine who will be relegated to Division 3A.

Despite a four-point defeat to Lancashire on Sunday, Roscommon are two points clear at the summit of Division 3A. Lancashire have been relegated from the division following that result.

Roscommon will go on to face Armagh in the final, who also lost out in their Round 5 fixture. Tyrone defeated them by six points in Healy Park.

Louth and Monaghan met in the other Division 3A tie of the day. The Farney County narrowly won that clash with a 1-11 to 1-10 victory. 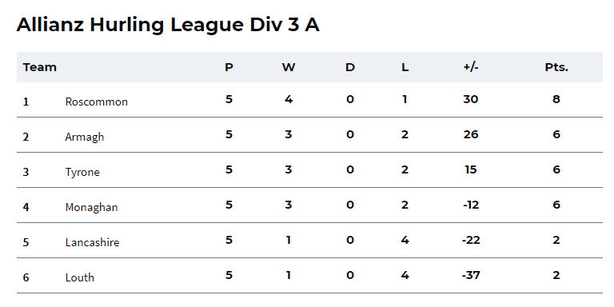 Sligo and Longford will contest the Division 3B final after meeting in Glennon Brothers Pearse on Sunday. The visitors easily came out on top with a 21-point victory.

Fermanagh also enjoyed an easy win in the other game of this group, dispatching Cavan at Brewster Park.