As we pass over the halfway point of the Allianz National Football League, the fruit of a winter of training field work – or the lack of it – on how teams want to play now leaves a strong imprint on the dynamic of every game.

Often, at the top table where most teams are prioritising championship football, league performances can be sacrificed for the longer-term benefits to the team of developing more effective patterns of play and forging new players in competitive fires.

In Division 1, the primary focus for development of the contenders has become clearer.

Kerry are building a mirror of the Dublin playing style, Galway are trying to add to their attacking options without losing their defensive shape and Mayo are trying to sort all of the playing pieces into the most effective roles within James Horan’s predetermined template.

The meeting of Ulster’s 'Big Two' on Saturday night shone a spotlight on the concerted effort Monaghan are making to expand their kicking game.

There were plenty of mistakes but in the first half it was fascinating to watch their thought processes in possession and the additional forward movement as a consequence.

Tyrone very definitely changed their approach for the All-Ireland final last year but on the evidence of this weekend, Mickey Harte has more faith in the tactics that took them to the showpiece for the first time in nine years.

In a game when the result had become critical to Division 1 survival for the Red Hand, they reverted to what they know best and what they do extremely well – a deep lying defence with a single attacking focal point to run off. 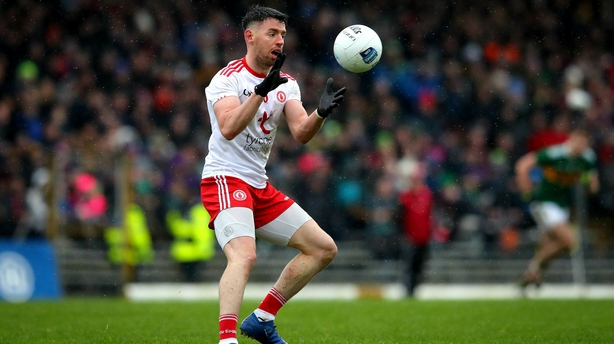 Ultimately it was an old experiment that created the platform for a very impressive victory.

When Mattie Donnelly was deployed as the attacking focus, the players very obviously had more faith in kicking early to him and suddenly all of their running had forward momentum.

A simple personnel adjustment but one that shifted the mindset of the whole team.

Of all the championship hopefuls building capacity through the league, Malachy O’Rourke now has the biggest headache after Saturday night.

Monaghan can set aside talk of tactics or game-plan for they have a more fundamental question in front of them.

In a game that obviously mattered a great deal to them, Tyrone brought an intensity and physicality that was a level above anything I’d seen this year in the league.

They were ripping and tearing at every contest and gave their opponents very little space to make decisions in.

The Monaghan players will have awoken Sunday morning fully aware that they were found wanting in the face of a scrap – the complete antithesis of what this team has represented in recent seasons.

If a team are not prepared to step towards a fight together, feel the napalm in their lungs in the pursuit of a foothold in the game and stand their ground in adversity it really doesn’t matter what the plan is with and without the ball.

Training will be very simple for the Farney men this week. Management will be asking the tough questions and there will be doubts until they see answers in Killarney next Sunday afternoon. 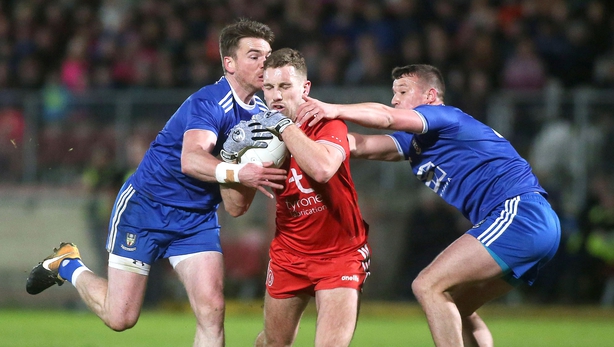 Astonishingly, we are now over the halfway point of the National Football League and confusion prevails around the practical application of the offensive mark.

Some fault lies with the framers of the experimental rule as it does not make sufficient provision for the adequate management of the process.

However, surely the referees and those charged with managing them cannot justify the total disregard of the very specific time-frame allowed to utilise a mark throughout four full rounds of games across all divisions?

This is an important experiment for Gaelic football and the mark as a fundamental feature of the game as it is now constituted. A lack of clarity harms the credibility of the rule as a candidate for retention post national league.

The experimental rule is outlined as follows:

"The application of the Mark in the two areas of it arising (ie as in current rule and in new proposal) shall be standardised as follows:

* Up to 15 seconds shall be allowed for a free to be taken from a mark.

* A score may be made from a free awarded for a Mark.

* The normal rules governing free-kicks shall apply (e.g. players being 13m from the ball before it is kicked).

* A free-kick from a Mark shall be taken from the hand(s) only.

* If a player opts to ‘play on’ when awarded a Mark, he may be challenged"

Anyone who has attended a game this season will readily recognize that point one has been almost entirely disregarded despite regular protestations from managers in post-game interviews.

This rule has now been a feature of games for two months. It is disappointing and alarming in equal measure that the referee development committee’s review processes would not have identified this as an issue and a priority for an upgrade patch.

In the absence of any clarity, the process should look something like this:

There may be a more coherent way to set the steps out but, irrespective, the supporters, players and coaches deserve clarity around the process.

When we watch a game we should all be able to understand the rules and exactly how they are supposed to be applied.

If we don’t have that we can’t give out about referees with any sense of confidence...