UCC lifted the Sigerson Cup after a 0-16 to 1-09 victory over 14-man St Mary’s, with the game played out in wet conditions in O’Moore Park, Portlaoise.

St Mary’s were well-organised and very determined but had Aaron Boyle sent off in the second half, which played a major part in the outcome of the game.

Kerry centre-forward Sean O’Shea was majestic for Billy Moran’s UCC and his magnificent display, which included seven points, two of those from play, went a long way towards deciding the outcome of the match. 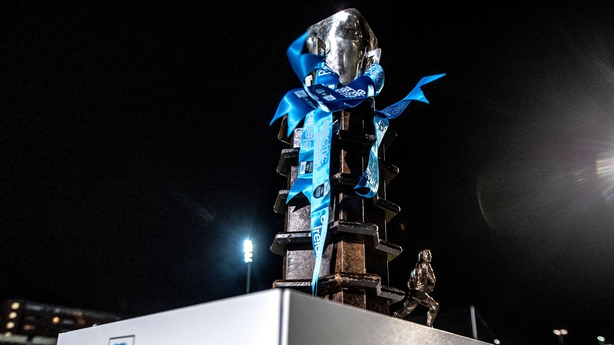 It was 'The Ranch' who opened the scoring, courtesy of Shane McGuigan’s effort in the opening minute.

Mary’s opted to operate with Cathair McKinney as a permanent sweeper in order to frustrate UCC, but a placed-ball effort from the excellent O’Shea levelled things up.

Points from Graham O’Sullivan and Padraig Lucey gave the Cork college a two-point lead, but it was the Ulster side who registered the game’s opening goal courtesy of Moy’s Ryan Coleman.

Coleman’s shot at a point fell short and keeper Mark White failed to deal with it under pressure, allowing the ball to squirm into the net.

O’Shea responded with a free for UCC to level procedures before Stephen McConville restored his side's advantage.

An outstanding effort from O’Shea brought the sides level and St Mary’s were opting to bring 15 players behind the ball at times, which made life very difficult for the UCC forward line.

Corner back Graham O’Sullivan gave his side the lead with an excellent effort and two further scores from  Sean O’Shea gave UCC a 0-09 to 1-03 lead at the interval.

It was O’Shea who opened the second-half scoring with a short range free that was cancelled out by a score from Mary’s corner-back Miceal Rooney.

McGuigan and Cian Kiely traded scores before an excellent effort from Ryan McCusker reduced the deficit to two.

The gap had been down to one point before Mary’s were dealt a major blow when Boyle was sent off to leave his side a man down heading into the final quarter.

An excellent effort from McGuigan brought his side level though, before it was cancelled out by another fabulous strike from O’Shea.

Three successive points increased UCC’s lead to four points and at this stage momentum was with the Cork college and they were in poll position to close out the match.

A great score from McGuigan reduced the deficit to three but UCC held on to lift the trophy, with a late point from Conal O’Hainifin the icing on the cake.

Video: One goal in the first-half and here it is.. pic.twitter.com/Y1BqX3lfhL

John Heslin the hero as Westmeath snatch the points against Clare