Goalkeeper Niall Morgan rescued Tyrone with an equalising point from play at Hyde Park as they came from seven points down to draw with Roscommon on a 1-10 to 1-10 scoreline.

It was the second week in a row that Morgan found the target from play, and he also converted two long range frees as the Red Hands battled back in a spirited second half performance to gain their first point of the campaign.

The Rossies led by 0-10 to 0-4 at the break, but Ultan Harney’s goal was the only score they managed in a second half dominated by the wind-assisted visitors. 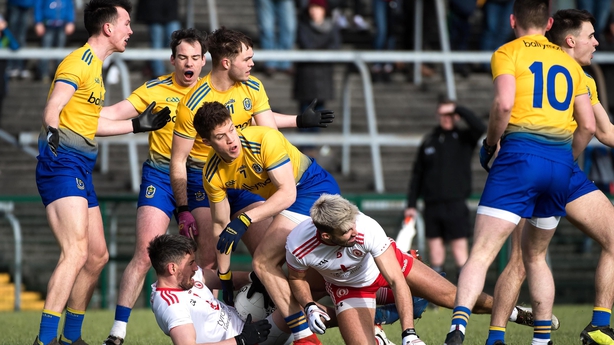 Roscommon played with the strong, gusting wind in their backs, but it was Tyrone who dominated possession in the early stages, with Mattie Donnelly and Niall Sludden heavily involved as they worked the ball through the hands.

They were susceptible to turnovers, however, and after Peter Harte had nudged them ahead from a free, the home side broke from deep for full back Conor Daly and new recruit from Kerry Conor Cox driving over long range scores.

Conor Devaney pressed strongly along the right flank and Cox was a constant threat with his movement and ball-winning ability, picking up loose possession to shoot his side back in front after Harte had knocked over another free.

Tyrone’s best move of the half ended with Kieran McGeary sending full back Ronan McNamee in for a fisted point, and the sides were level going into the second quarter.

The Rossies crafted a glorious goal-scoring chance for Donie Smith, but the full forward’s low shot came back off the butt of a post.

Tyrone also had a goal opportunity when Brian Kennedy sent Cathal McShane through, but with the net at his mercy he shot wide.

Roscommon, with Tadhg O’Rourke and Enda Smith raising their game, stepped up the tempo in the latter stages of the half, hitting three points on the spin, including two from Shane Kiloran and a third for Cox, to go ahead by double scores, 0-6 to 0-3 on 25 minutes. 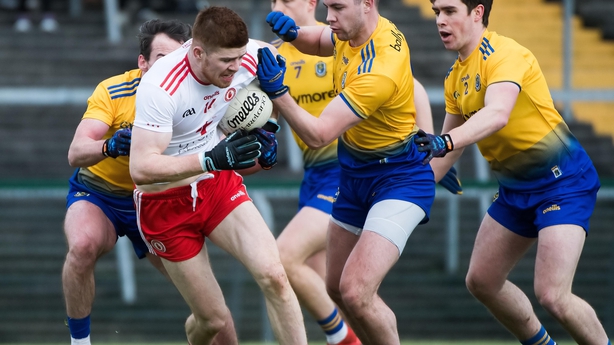 And with Niall Morgan’s kick-outs coming under serious pressure, Anthony Cunningham’s men produced another flourish, with Donie Smith, Kilroy and Ronan Daly all on target as they went seven clear.

Tyrone managed just one point from play in the opening half, with all of Roscommon’s scores coming from open play as they took a 0-10 to 0-4 lead into the interval.

Harte narrowed the gap with a couple of frees, but in the 43rd minute, Roscommon struck a major blow, Ultan Harney punching to the net as Cox crossed from the left.

Goalkeeper Morgan converted a monster 60 metre free, and Tyrone narrowed the gap to three points when substitute Kyle Coney arrowed in a menacing delivery which Cathal McShane fisted to the net in the 50th minute.

Tyrone’s intensity and effectiveness in the tackle improved markedly as they hunted down opponents in possession, and a Darren McCurry score edged them closer.

And for the second game in a row, goalkeeper Morgan scored from play, a glorious effort to bring his side level with three minutes remaining.

Roscommon were awarded a scoreable free deep into stoppage time, but the decision was reversed by referee Noel Mooney following an altercation, and the Ulster men survived.