Galway withstood a late rally from Cavan to get their Allianz Football League Division 1 campaign off to a winning start in a game where five players were sin-binned.

Cavan were reduced to 12 men for four minutes in the second-half when they had three players in the bin at the same time, while Galway suffered two black cards at separate stages of the half.

But Galway did enough to pull ahead and open up a five points lead which allowed them some wriggle room when Mickey Graham’s men came with a late rally which yielded three points but never looked like getting the goal they needed to snatch it.

The sides were deadlocked at 0-05 each at the break after Galway failed to make the most of wind advantage.

Galway only led once in the half when Padraig Cunningham edged them in front after four minutes with a point from 20 metres.

Cavan opened up a 0-03 to 0-01 lead after ten minutes as Pierce Smith and goalkeeper Raymond Galligan pointed frees either side of an excellent effort from the right wing by Conor Madden.

Peter Cooke, one of five late changes to the Galway starting 15, kicked a good point for Galway to make it 0-04 to 0-02 at the end of the opening quarter.

Cavan hit back and Martin Reilly landed a fine free from the right and then Jack Brady made it 0-05 to 0-02.

The Tribesmen scored the next three points, with Shane Walsh pointing a free from the right and Gareth Bradshaw pointing from play before Johnny Heaney had a goal effort deflected over to tie the sides at 0-05 each after 29 minutes.

Cavan finished the opening half on the offensive but missed a couple of frees and the sides went in level at the break. 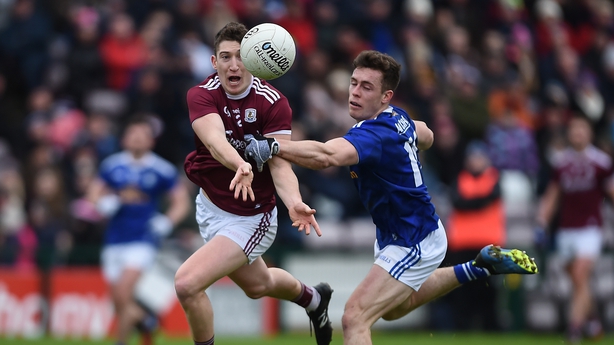 Reilly and Cunningham exchanged points after half-time but while Galway lost Cillian McDaid to a black, they outscored Cavan by two points to one while down a man for ten minutes.

Jack Brady tied the sides at 0-08 each with a superb point from a sideline on the right but then Galway opened up a two points lead for the first time when Heaney and Gary O’Donnell found the target.

But then Cavan lost three players to black cards with Reilly, Killian Brady and Killian Clarke spending ten minutes in the sin bin along with Galway’s Peter Cooke, and the Tribesmen pushed on to lead by 0-12 to 0-08 thanks to efforts from Ian Burke and Heaney.

Another free by Walsh put five between them but a free from Reilly and a good effort from Cian Mackey reduced the margin to a goal.

That gap was reduced to two with a free from Conor Madden but Cavan were unable to rescue the tie in the dying moments as Galway held on for a priceless victory.