A strong wind and driving rain made it a classic game of two halves at MacHale Park on Saturday evening, with Mayo eventually coming good to win their Allianz Football League opener against Roscommon.

Afterwards, the respective managers - James Horan and Anthony Cunningham - were full of praise for the way their sides dealt with the tough conditions.

However, the greater fallout from this encounter is likely to deal with a first-half incident where Roscommon's Donie Smith made contact with the eyes of Keith Higgins. By way of reaction, Higgins did make some contact with Smith, who then threw himself to the ground holding his face.

In recent seasons, accusations of eye-gouging have been a source of concern for the GAA.

Both Horan and Cunningham told RTÉ Sport that they did not see the incident, with Horan saying: "I didn't see it. My backroom team were watching and rang down straight away to say that there was an incident.

"All I can do is have a look at it. I don't know whether there was intent or not.

"We have had a lot of battles with Roscommon down through the years, it's been fiery, but fair."

Cunningham added: "There was a lot of physicality out there because of the conditions. Did I see that incident? Absolutely not.

"We wouldn't promote or endorse that type of behaviour in any way."

As to an overall assessment of the game, Horan singled out his four newcomers. 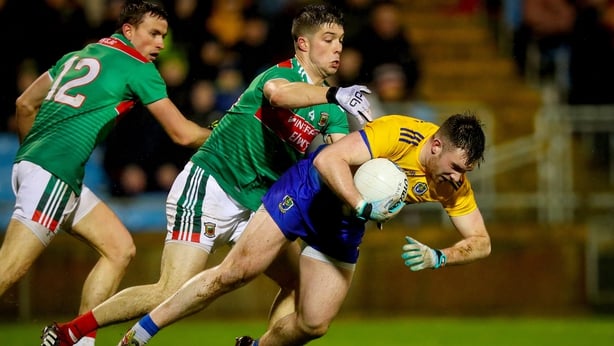 "I was delighted to get four guys on to make their ebuts tonight. Conor Diskin did very well, Brian Reape got a cracking goal. Fionn McDonogh and James McCormack got some game time.

"It was very important for us to get the win. Our record here (at McHale) isn't as good as we would like to be. We got through it, we got the win and we are now looking forward to Tyrone next weekend."

His opposite number lamented his side's inability to put on the scoreboard in the period before half-time, when playing with the wind.

"There was a ten or 15-minute period when we had good chances for scores," said Cunningham.

"It's such small margins that make a difference."