Determined Dublin shook off a slow start at Parnell Park to come good for new manager Mattie Kenny and record an opening round win in Division 1B of the NHL.

The hosts trailed by two points at half-time and struggled for inspiration but registered 1-03 without reply after the restart to regain the lead.

They remained in pole position from there on with half-time substitute Donal Burke firing 1-04 to help turn a tricky situation into a six-point win.

Burke and five of Dublin's starting players competed for DCU in the Fitzgibbon Cup on Thursday afternoon but showed no signs of fatigue.

Eamonn Dillon and Darragh O'Connell grabbed Dublin's other goals while John Hetherton had a strong game from centre-forward too, claiming four points and creating several more.

Dublin will fancy their chances in Round 2 next weekend also when they travel to Offaly while Carlow will host Galway.

The McDonagh Cup champions came into the game as 8/1 underdogs though felt they were competitive for long spells in last month's 2-21 to 1-16 Walsh Cup defeat to the Dubs.

That was Kenny's first competitive game in charge of Dublin and he looked set for a similar win in his first league game as boss after a promising start here.

Feargal Whitely clipped a neat point inside the opening minute and Fiontan McGibb, a late addition to the forward line, added another before Darragh O'Connell netted in the fourth minute. 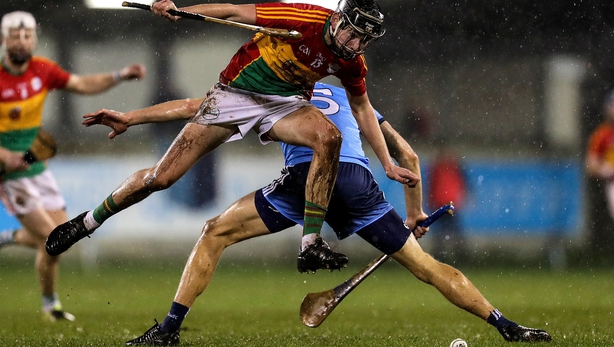 The Kerry man, who sat out last year's Championship and was injured for much of 2017, capitalised after great work by Hetherton, who fetched well, and Dillon.

Dublin led 1-02 to 0-01 at that stage but the hosts only scored four more points in the entire half with just one of those coming from play.

Hetherton got all four of those scores as Dublin were surprisingly forced to rely on scraps to survive.

Led by Kavanagh in attack, Carlow came into the game strongly and outscored Dublin by six points after O'Connell's goal to lead 0-11 to 1-06 at half-time.

Kavanagh, who hit 0-12 in total, fired eight of those Carlow points in the first-half and though just two came from play he was hugely influential in pressurising the Dublin defence. 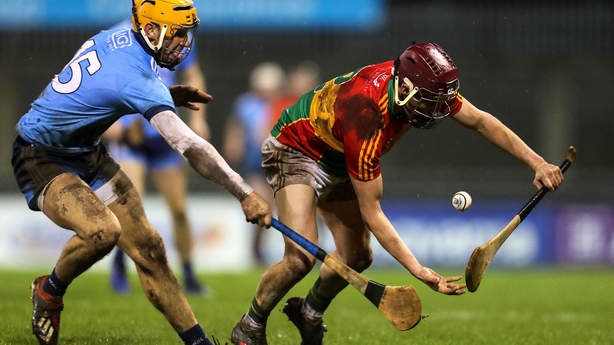 But they were much better after the break and Burke was the clear game changer with that terrific 1-04.

They restarted with points from McGibb and Burke before Hetherton and Jake Malone combined to play in Dillon for a 40th minute goal.

Suddenly Dublin led by three points again, 2-08 to 0-11, and remained ahead from there on despite Kavanagh continuing to pick off the points for Carlow.

Tomas Connolly and Paddy Smyth also added scores for Dublin while Danny Sutcliffe had a strong impact from the bench. Oisin O'Rorke also came on and wrapped up the scoring late on with a converted free.