Roscommon forward Enda Smith welcomed the "bite" that's developed in the rivalry with Galway in recent years and said it's steeled his team for a tough spring.

The two counties have clashed in the in the last five FBD Connacht League finals and they played out a feisty battle in the latest edition in Tuam on Sunday.

Donie Smith drove the Rossies to a 0-13 to 1-05 success that sets them up nicely for their Allianz Football League Division 1 opener against Mayo this Saturday night.

New manager Anthony Cunningham will have taken lots of positives from that win, but the real tests are yet to come.

"There was a good bit of bite in the game, there's a good rivalry building up," Enda Smith told RTÉ Sport's Brian Carthy.

"It puts us in good shape going into the Mayo game. With the soft ground the ball is kind of hard to control. With late hits going in it's hard for the ref to control it.

"There was a bit of bite like I said but it's grown over the last few years with ourselves and Galway. We're playing each other twice most years so there is a bit of rivalry growing there." 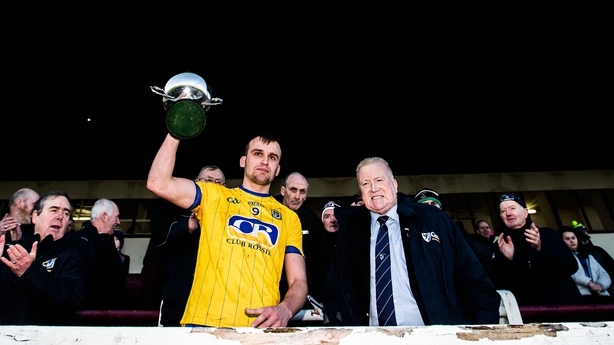 Roscommon's defensive performance was particularly impressive as they restricted the Tribesmen to just six scores in 70-plus minutes.

Former Galway hurling manager Cunningham clearly intends to change the side's style this year and Smith hopes it will stand them in good stead for the challenges that lie in wait.

"It's been a different take. He's putting his own stamp on our team. He's been around the block, he knows exactly what it's about. It's still the early stages. So far so good, Today was a good test to see where we are. We're happy with how it went.

"It's not easy going down to Castlebar. We haven't had much success down there in recent times in league or championship. It's a tough ask. Hopefully we can go out there and give a good account of ourselves. We've Monaghan and Tyrone straight after that; it doesn't get any easier."