Tyrone won their seventh Dr McKenna Cup title in eight seasons with a 0-16 to 0-14 win over Armagh in a bad-tempered final at the Athletic Grounds.

Man of the match Darren McCurry proved the match-winner with a nine points haul, eight of them from frees, as the Red Hands edged out their local rivals in front of a crowd of 11,318.

Armagh had James Morgan and Aaron McKay sent off, with Tyrone’s Ronan McNamee also dismissed in a rancorous contest which boiled over on a number of occasions.

Just hours after Central Council voted to abandon the experimental hand-pass rule for the National Football Rule, Ulster GAA followed suit and also dispensed with the restriction for this decider.

And the result was a more free-flowing game, unblemished by the confusion and frustration which it had caused throughout all the pre-season competitions.

Sunday’s FBD Connacht League final between Galway and Roscommon at Tuam will also be played without the ill-fated hand-pass provision.

"The decision in relation to the experimental rules, agreed with the Connacht Council, Croke Park and the four competing counties in the Dr McKenna Cup final and Sunday’s FBD Connacht final, was that as the Central Council had agreed to decommission, for want of a better word, the hand-pass rule, that it wouldn’t apply in the pre-season finals in Ulster and Connacht," said Ulster Council secretary Brian McAvoy.

"But it did take all four competing counties to be in agreement, and all felt that as Central Council had agreed to remove that experimental rule, we wouldn’t use it tonight or tomorrow."

Ronan O’Neill had Tyrone ahead early on, but Niall Grimley nudged the Orchard ahead with a ’45 after Rian O’Neill’s ninth minutes shot had been deflected past.

Mickey Harte’s men were unusually sluggish in those early stages, and conceded space and pace as Stefan Campbell stretched the lead to three. 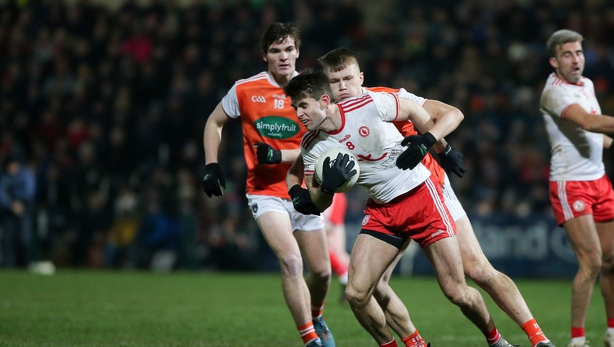 Campbell’s excellent effort was the only score either side managed from open play in the opening 20 minutes, and it was Armagh who were playing all the creative football, with the final pass often letting them down.

But Tyrone were still just a point behind by the 24th minute, with Niall Sludden running strongly through the middle and finishing sweetly.

McCurry’s third free had them level, and the scores started to flow for last year’s beaten All-Ireland finalists, who hit five on the spin before Grimley halted the slide with his fourth placed ball score.

Rory Grugan drifted deep to spark some attacking momentum for Kieran McGeeney’s side, but more often than not, Liam Rafferty and Ronan McNamee stepped in to intercept.

Tyrone led by 0-09 to 0-06 at the interval, and another wonderful point from Campbell, back in the side after a year-long break, had the home support in good cheer.

Grimley also added to his tally, while Jamie Clarke chipped in with a neat score, along with Grugan, who brought the sides level on 56 minutes.

But McCurry was in deadly form from placed balls, curling over another couple with his trusty left, as Tyrone restored the advantage to two.

Armagh defender James Morgan was sent off on a second booking, but almost immediately, they were awarded a penalty, which produced just a point, Grugan’s kicking clipping the top of the crossbar.

Tempers flared for a third time, and straight red cards were brandished to Armagh’s Aaron McKay and Tyrone’s Ronan McNamee, as the game finished on a tempestuous note, the Red Hands pushing for home with McCurry’s ninth of the evening.