O'Byrne Cup holders Meath crashed out of the competition at the semi-final stage after paying the penalty against Dublin in dramatic fashion at Parnell Park.

Old rivals Meath and Dublin couldn't be separated after 70-odd minutes of energy sapping action which meant a novel penalty shoot-out was required.

Dublin, who were represented in the competition by their development panel of fringe players and rookies, eventually prevailed by 3-1.

It means Dublin will play Westmeath in the final next Friday night.

It will be another opportunity for the four-in-a-row All-Ireland champions to assess their reserves and potentially uncover a rising star like Brian Howard in 2018 and Niall Scully in 2017.

Dublin kept supporters guessing about the identity of their line-up until the match programmes were distributed at the Donneycarney venue.

Conor Mullally, who came on against Roscommon in the Super 8s last summer, was the only starter who featured in the 2018 Championship.

Meath were much closer to full strength, lining out with eight players who featured in last year's Championship. 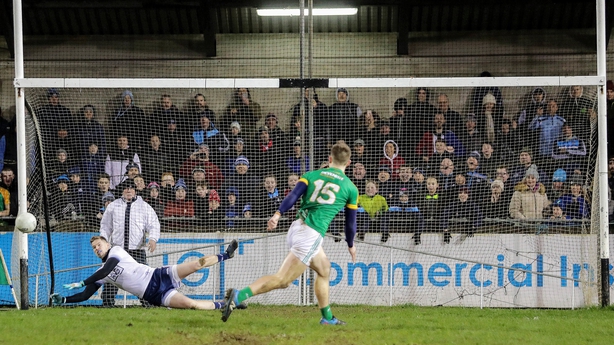 Andy McEntee's visitors thrived on the underdogs role initially. Ben Brennan, who scored six points in last June's All-Ireland qualifier defeat to Tyrone, put the Royals into a 0-02 to 0-01 lead after four minutes.

They retained that advantage until first-half injury-time when Basquel clipped a Dublin point to leave the scores tied at 1-07 apiece at the break.

In between, Meath had led by as much as five points at one stage with blood sub Graham Reilly sniping 1-01 including an eighth minute goal.

Meath took the direct route for the goal with midfielder Adam Flanagan powering forward after a long kick-out and playing in Brennan who picked out Reilly.

But Dublin bossed the half from there with points from Lynch, Smith and Sean Bugler hauling them back before McDaid's 34th minute goal.

The Ballyboden defender got on the end of a neat passing move and palmed in from close range after Bugler's ball across from the left.

Basquel's equaliser leveled it up and teed up an intriguing second-half in which Dublin would have the wind advantage.

There were less scores in the second-half but the tension increased as the old rivals played out an intriguing 35 minutes or so.

They were level five times in total in the second-half with Dublin consistently edging ahead only to be reeled back in by a determined Meath.

Dublin substitute McHugh thought he'd fisted over the winner in the 74th minute when he put his team 1-12 to 1-11 ahead but Newman responded at the death.

The experienced Meath forward clipped over a free after Donal Keogan had been fouled by Mullally who was sent to the sin-bin.

It meant a tied game at 1-12 apiece and the lottery of penalties which Dublin prevailed in.