Tiny Mullinalaghta from a half-parish of just 447 in north-east Longford have made history by becoming the first Longford side to collect the AIB Leinster club SFC title.

Mickey Graham's men came into the contest as massive underdogs as the first Longford side ever to contest a final at this level.

And they predictably trailed by three points with four minutes of normal time remaining before pulling off a famous smash and grab raid.

David McGivney reduced the deficit to two before Gary Rogers fired home a 59th minute penalty that put the St Columba's club ahead and Aidan McElligott added an insurance point.

Dublin star Cian O'Sullivan conceded the penalty and picked up his second yellow card four minutes into stoppage time to cap a terrible day for Crokes but an incredible one for the Longford champions.

Rian Brady top scored for Mullinalaghta in front of 3,510 at Bord na Mona O'Connor Park though it was Rogers' goal that will live long in the memory.

Their reward is an AIB All-Ireland club semi-final clash with Munster champions Dr Crokes on February 16.

It means that Graham, the new Cavan manager, will have to remain on as Mullinalaghta boss for several more months and balance both positions.

Mullinalaghta's brave bid for history began as well as they could have hoped with the sides still level at half-time.

In a low scoring game, dominated by a high wind in the underdogs' favour, they were tied at 0-05 to 1-02 at that stage. 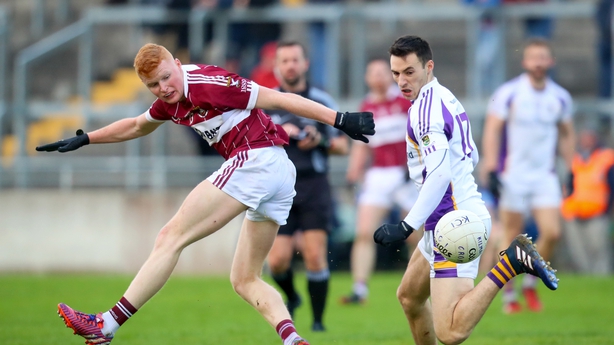 It was Kilmacud that grabbed the goal after just five minutes when ex-Dublin and Clare forward Burke finished from close range after a neat passing move.

But the red hot favourites, All-Ireland winners as recently as 2009, didn't score from open play again until the 39th minute.

Mullinalaghta responded to the Pearson point with three of their own, from Brady, Donal McElligott and David McGivney.

That McGivney score put them ahead at 0-04 to 1-01 between the 20th and 31st minutes until Mannion tied it up again from a free just before the break.

Paul Mannion came into contest under pressure to perform after returning 1-06 and 2-06 tallies in the county final and the provincial win over Dunboyne.

He was quieter against Portlaoise in the semi-finals but still hit 0-05 in that game though blasted two early wides here.

He started at centre-forward but moved in to the full-forward line soon after and was carefully tracked throughout by Patrick Fox.

Mannion hit his third wide of the game early in the second-half but Craig Dias was more accurate and moved Crokes ahead again.

The big wind favoured Crokes now and they extended their lead when Pearson blasted one over from long range.

Crokes got the margin out to three points after 48 minutes before Mullinalaghta broke a 30-minute barren streak with a point from Brady.

Moorefield memorably came from behind late on in last year's provincial final to snatch the win and Mullinalaghta did exactly the same here.

They closed the gap to two before O'Sullivan fouled Aidan McElligott for a penalty and Rogers fired home. Moments later, McElligott got on the end of a neat move to hit the insurance point from close range, securing a remarkable two-point win.