Roscommon footballer Conor Shanagher has given a harrowing account of the concussion trauma that forced him to retire at just 20 years of age.

Shanagher has called on the GAA to educate its managers, coaches and selectors more on an issue he feels is not taken seriously enough in the game, highlighting the greater urgency his rugby club showed when he suffered a head knock when playing a match aged 15.

The GAA does have a concussion management guide, an 'if in doubt, sit them out' policy that insists a player should be taken off immediately if he or she shows any signs of a concussion.

Players under the age of 18 are not supposed return to competitive action or full contact training without medical clearance, and that return should be at least two weeks from when a diagnosis was made.

However Shanagher feels more can be done. Speaking to RTÉ Radio 1's Sunday Sport, he opened up on the injuries that forced him to hang up his boots.

"The first time I went to the doctor he looked at my MRI, showed me there was no immediate trauma and nothing came up bad, so that was a sigh of relief," he said.

"I had no idea what the effects were down the line"

"But after that he sat me down and said, 'right, this is what the story is, you've had six concussions, two in the last three months...'

"To be honest I had no idea what the effects were down the line. He talked about mental health problems such as depression and anxiety, and gave examples of a few rugby players and NFL players. That's when I started thinking, 'this is not what I want when I'm 35, 40'. The alarm bells started going.

"Coming home, I was thinking, 'there's no way I can change the way I play Gaelic football'. It's a contact sport. there's no way you can pull out of tackles or not make a tackle because it's in the back of your head. I knew that wasn't an option.

"When I got home my dad couldn't believe I was told to stop playing. He thought a six-month or 12-month break would be sufficient. I suppose I had no option."

His first concussion came in a game of rugby, when he was 15. He took a bang to the head and was swiftly withdrawn from the action.

"I stayed down for a few seconds and management said, 'right that's it, off you come'. I was pulled off the pitch and they said, 'there's not a hope you're coming back on'. I went to training the next week and they said, 'not a chance, you're off for three weeks, see you then'.

"That evening I'd a pounding headache. I was supposed to go to evening study but I rang my mam and said, 'there's no way I can go and sit down in a hall with this headache'.

"I went home, went to bed, lay down for two hours, and after dinner it was nearly gone. So it was back to normal. I was back in school the next morning."

Shanagher would suffer two more concussions, in transition year and then again when he was in fifth year. In his Leaving Cert year, it happened again.

"After every one I went to the doctor, got checked up and it was a case of, 'yeah you're concussed, take three weeks off'.

"In Gaelic I got concussed, played on, nobody knew I got concussed. It was a bang to the head. I don't remember playing on. That was in my Leaving Cert year. It was the first really bad concussion I got, with prolonged headaches for 24 hours. Then it was back to normal."

Despite his injury problems, Shanagher's reputation was growing. He was a key part of Shane 'Cake' Curran's Roscommon Under-20s football panel and was expected to progress to the seniors.

Last June, the Rossies faced Galway in a Connacht Under-20 semi-final at Tuam Stadium.

"It was 10 minutes into the game. I went in for a tackle. Their corner-forward ducked out of the way and my lad ran in to me, caught me under the chin. That's all I remember. It took three minutes for me to come around.

"My mam had made her way on to the pitch. She was there looking over me, seeing what the story was.

"I remember going in to A&E in Galway, sitting up in the bed and going, 'what am I doing here? I'm perfectly fine, I've no headaches, I don't feel dizzy. Why an I not be back in Tuam with all the lads celebrating?'

"I was fully focused on the Connacht final [against Mayo] seven days later.

"On Tuesday I met the physio. I did a little running session to see how I was getting on. Nothing hard. I talked to 'Cake' , he asked 'how are you feeling?' I said 'all good'. 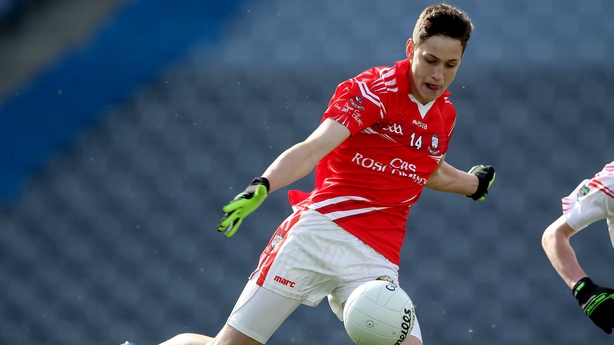 "I woke up Wednesday morning and I knew it had hit. The headaches had started. I couldn't get out of bed after a 13-hour sleep. I went down to my mam and said, 'this isn't good'.

"I went into the management and said, 'there's no way I'm going to be able to play'. It took two days for it to come on and four days for it to leave again."

"I went up for a kick-out. Three or four of us jumped. That's all I remember"

Things were looking bleak. But seven weeks later, in a club game against Oran, they got even worse.

"I went up for a kick-out. Three or four of us jumped. That's all I remember. I was taken off and as I was sitting down, I knew this wasn't going to be good. I could feel a slight headache coming on. I came home and packed my bags for college; I was supposed to start college in Maynooth the next morning.

"I slept for 14 hours, went to a lecture on Monday at 11am, came home, slept for three hours. I'd wake up and [the lads he lived with] would be like, 'I was talking to you earlier'. I'd have no idea.

"My mam had been on to the physio at home and made an appointment for the Wednesday morning. The test for concussion is all to do with your balance. It's all monitored on a pressure pad. I knew as soon as I stepped up, the way I was swaying, I knew it was really bad. I was way off. I knew the numbers I had to go for - I was three or four times what I should have been."

At St James's Private Clinic, he went through more tests.

"That's when I knew that this wasn't just headaches, this was my whole brain not functioning correctly"

"The doctor started off with my reactions. He was moving his finger quickly and I was way off. By the time he'd put his hand out to the right and then move to the left, I'd still be going to his right.

"Then he pulled out a picture book full of household items and animals. He said, 'name as many of them as you can'. I knew what they were but I couldn't get the words out.

"Then he says, 'I'll give you one minute to name as many words beginning with 'c' as you can'. I got nine, when I should have been getting 40 or 45. That's when I knew that this wasn't just headaches, this was my whole brain not functioning correctly."

Shanagher returned four weeks later to repeat the tests and recorded vastly improved results. But his playing days were done. It was a bitter pill to swallow. He is, however, at ease with the decision, one he simply had to make for his own long-term health.

"As an amateur organisation I don't think concussion is taken seriously enough," he adds.

"I suppose managers and selectors don't understand concussion. More work shops and education on the whole topic could be given countrywide so everyone has a basic understanding and know how to deal with it straight away.

"Everyone needs to know concussion is a serious thing."