Gaoth Dobhair won their first ever Ulster Club SFC title with a 0-13 to 0-12 win over Scotstown in an extra-time thriller at Healy Park.

It was a gripping decider played in difficult conditions at the Omagh venue, and the Seamus McFerran Cup headed for the Hills of Donegal for the first time since 1975, when St Joseph’s were crowned champions.

For long spells it looked as if Scotstown, knocking on the door for the past five seasons, were about to finally hammer it down, but they just couldn’t match the passion and durability of the men from Tir Chonaill.

The sides were level on five occasions in the first half, with Shane Carey hitting three Scotstown scores, and they went in deadlocked at 0-05 each at the break

The Farney men went three clear, but two late Odhran MacNiallais scores tied it up at 0-11 each.

They were still level midway through extra-time, and it was substitute Shane Ferry who scored the precious winner in the 75th minute.

Odhran MacNiallais knocked over an early free, and a Kieran Hughes equaliser set the tone for a highly tactical first half that was to be level on five occasions.

Both sides dropped men back and set themselves up to break at pace, and the consequence, rather than a turgid, soul-less defensive contest, was at times an entertaining show of fast, counter-attacking football on a heavy and unforgiving sod. 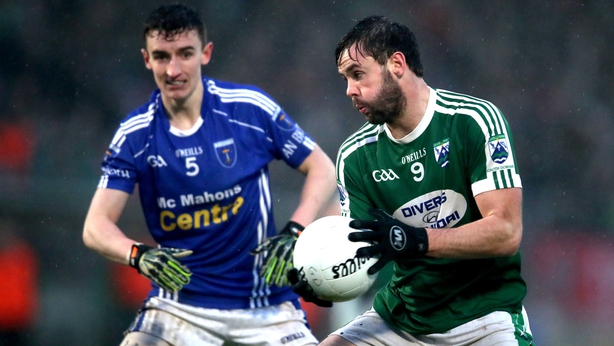 Sloppy passing gave the Donegal champions an opportunity to turn over possession and break at pace for Michael Carroll to slot over a point, which was quickly cancelled out by Shane Carey’s converted free, and it was Carey who gave the Farney men the lead for the first time with a delightful effort from play in the 18th minute.

Scotstown chose to play without an imposing full forward, with Kieran Hughes toiling around the middle along with brother Darren, while their opponents had former Donegal star Kevin Cassidy stationed on the edge of the square, and he was in the thick of it when Collum’s dropping ball created panic, with Rory Beggan managing to scramble it to safety as Daire O Baoill just failed to get a vital boot in.

Scotstown raided instantly for Darren Hughes to fire over a point, which once again was cancelled out by Cassidy, but Carey’s third score, the product of Conor McCarthy’s exquisite long pass to Francis Maguire, nudged his side back in front.

If the first half was dominated by strategy, the second brought adventure and flair from two sets of talented footballers as they threw off the shackles.

It was Scotstown who burst into spectacular action with three points, two of them from Carey and a brilliant McCarthy effort, to pull clear, and they continued to defend with vigour, with Jamie McCarey and Donal Morgan halting raids from the men from the north-west.

Going into the final four minutes, Scotstown were clinging on to a two points margin, but MacNiallais steered over two late scores to draw the sides level again.

And deep into stoppage time, Michael Carroll thought he had won it for the Donegal champions, but the score was disallowed by referee Noel Mooney for Odhran McFadden-Ferry’s illegal hand-pass.

Tied on 0-11 each, it went to extra-time, and they remained inseparable midway through, with just a point each added, but Scotstown were down to 14 men following the straight red card dismissal of top scorer Carey.

The tension built through a dogged final segment, and it was substitutes James Carroll and Shane Ferry who combined for the winner, with the former slotting over the most valuable score of his career.

Beggan had a chance to send it to a further spell of extra-time, but his 50 metre free dropped short.