By Conor McKenna at Pearse Park

Mullinalaghta St Columba’s booked their place in the Leinster final, after a facile 18-point victory over Carlow champions Éire Óg.

Éire Óg were awful and had three men sent on a day to forget. Mullinalaghta on the other hand become the first ever Longford side to play in the Leinster senior decider and if they can replicate this performance, they will not be too far off going all the way.

It’s a remarkable achievement for the tiny parish on the Longford/Cavan border.

Mickey Graham has been named as Cavan manager and that looks a superb acquisition by their county board as the work Graham has done at Mullinalaghta has been truly sensational.

Éire Óg opted to put 12 men behind the ball at all times and it didn't work, as the Carlow side simply could not threaten.

Éire Óg almost had a goal early on with Christopher Blake’s effort saved superbly with six minutes on the clock and that would have given Éire Óg a lead to defend but instead it was the Longford side who opened the scoring courtesy of half-back Donal McElligott.

Christopher Blake equalised for Éire Óg but that was as good as it got for the Carlow champions with Mullinalaghta registering five points in succession to hold a 0-6 to 0-1 interval advantage.

It was never going to be easy for Éire Óg playing with a man less for the second half and James McGivney’s goal with 44 minutes played gave his side a ten-point advantage. 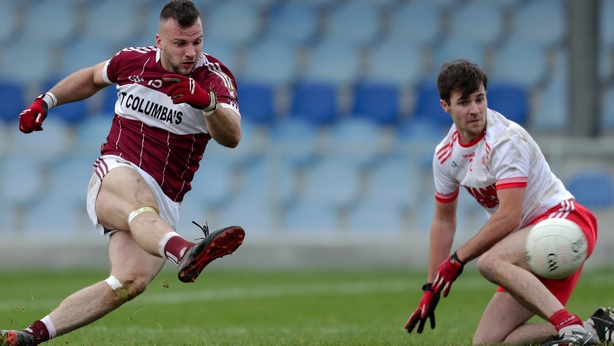 Éire Óg played the last quarter with 13 men after Christopher Blake was dismissed for two yellow cards and Mullinalaghta stretched their advantage to 13 points after a long ball in from Jayson Matthews was fisted to the net by Aidan McElligott, who was forced to go off injured after an altercation with Eire Og goalkeeper Robert Moore, who was shown a straight red as a result.

Mullinalaghta pushed on for an easy victory that was fully deserved.