(After two periods of extra-Time)

Pauric Mahony, magnificent throughout for the Waterford champions, along with substitutes Barry O’Sullivan and Conor Sheahan, tagged on the three match winning points in the fourth period of extra-time, to the delight of the home support.

Ballyea, inspired by Niall Deasy and Jack Browne, were out on their feet at the end of a contest, which could have gone either way, on a day when two teams came to hurl in what proved a game for the ages in front   of a 2,200-strong attendance.

Ballyea went in at the regulation break leading by 1-09 to 0-09, with Deasy’s three-pointer, rifled home seconds before the additional minute was announced, proving the difference between the sides.

The rangy Deasy, who provided Gunners full-back Barry Coughlan with a testing examination, latched onto Ryan Griffin’s pass, cutting inside Coughlan’s left shoulder to lash the ball beyond Stephen O’Keeffe with a one-handed strike.

The Clare champions, buoyed on by a sizeable travelling support, were first to strike, with Tadhg Lynch pointing after 27 seconds.

Two minutes later, Gunners talisman Pauric Mahony turned over the first of three first half frees, and he was next to score, this time from play, come the fifth minute. Deasy opened his account with a 10th-minute free from 45 metres, before Pauric Mahony, assisted by younger brother Mikey, pushed the Waterford kingpins two points clear with a point from a similar distance.

Check out the full-time highlights between Ballygunner (Waterford) and Ballyea (Clare) were we saw two periods of extra-time! pic.twitter.com/owPyUYfVRF

Ballyea corner-forward Martin O’Leary, from beneath the lip of the Walsh Park stand, turned over an excellent point from the left channel after 12 minutes, following a super catch and pass by Gary Brennan.

Seconds later, a miscued Ballygunner puck-out was punished by the ever-threatening Tony Kelly, but the Gunners were soon back in front thanks to a Mahony free converted from just inside his own half.

A 17th-minute move involving Tim O’Sullivan and Billy O’Keeffe was finished by Pauric Mahony, and Ballygunner’s momentum was maintained moments later when Brian O’Sullivan pulled instinctively over his shoulder.

But the remainder of the half was dominated by the visitors, with Deasy registering a superb brace of points in the 19th and 20th minutes.

Martin O’Leary cleverly flicked the ball away from the advancing Eddie Hayden before bringing the sides level in the 22nd minute. Two minutes later, from inside his own 65, Deasy turned a free between the Keane’s Road uprights to send Ballyea ahead, and things got even better when Tony Kelly landed a magnificent sideline cut over the sweet spot from all of 55 metres. 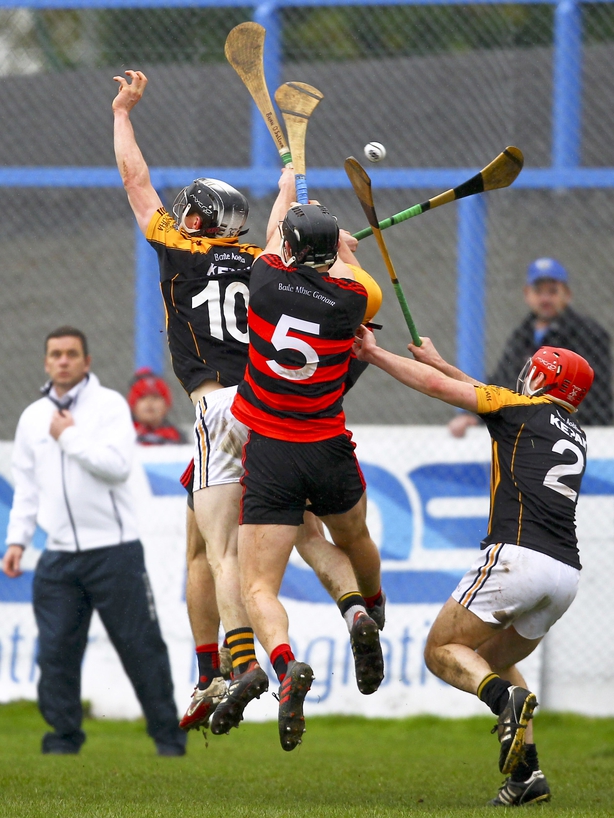 A Pauric Mahony free stemmed the flow for the designated hosts in the 28th minute before Deasy blasted the ball beyond Stephen O’Keeffe to send Ballyea four points clear. But the last word of the opening half was provided by impressive Ballygunner corner-back Ian Kenny who struck well from his own 65 to leave his side a goal in arrears at the interval.

A dramatic second half ebbed and flowed in either direction, but it was Ballyea who began the brighter, with points from Tony Kelly and Martin O’Leary sending them five points clear. And when Gary Brennan latched onto Kelly’s sideline to find his range after 35 minutes, the force was clearly with the 2016 Munster champions.

But Ballygunner, demonstrating a resolve that’s been rarely required of them over the course of five successive Waterford senior titles, gritted their teeth and battled their way back into this stirring contest.

Pauric Mahony added two further points to his tally (one from a free) in the 36th and 39th minutes before Conor ‘Speedy’ Power hauled Ballygunner back into the contest.

The corner-forward pointed in the 39th minute and did even better a minute later, slipping the sliotar beneath Barry Coote following Ian Kenny’s deep ball, to leave just two points between the sides.

Two minutes later, Power raced onto Harley Barnes’s pass to reduce the Gunners’ arrears to the minimum before Gary Brennan struck his second point as the game edged into its final (regulation) quarter. Two frees in the 48th and 49th minutes by Mahony brought the sides level, and four minutes later, following superb ferreting by Shane O’Sullivan, Mahony sent the Deisemen ahead.

But back came Ballyea, responding instantly through a Tadgh Lynch effort from 50-plus metres. Brian O’Sullivan and Pauric Mahony (the latter, superbly from the left flank) sent Ballygunner 1-17 to 1-15 clear and on their way to victory – or so we thought.

Three minutes from time, Deasy rose alongside Pierse Lillis and beat his team mate to the chase to bat Tadgh Lynch’s deep delivery beyond Stephen O’Keeffe and into the Gunners net to edge Ballyea a point ahead, and when Martin O’Leary and Lillis both found their range, the Black and Gold looked set to advance to the Final.

But the drama was far from complete, as Philip Mahony proved an unlikely saviour for Ballygunner, swiftly batting Conor Power’s cross-goal ball into the net to send the game into extra time. And there was knuckle-chewing aplenty for the punters to yet endure - and enjoy - in equal measure.

GOAL for Ballygunner’s Philip Mahony to level the game and bring it to extra time! pic.twitter.com/3ZTqi9yU0l

Deasy put Ballyea back in front 39 seconds into extra-time and pointed again within 90 seconds to send the Banner outfit two clear but a Mahony free and Barry O’Sullivan effort left the sides level for the sixth time come the 65th minute.

Three minutes later, Deasy converted another free but Mahony’s 70thminute free left the sides level on 2-20 apiece come the quick turnaround. Five minutes into the second period, JJ Hutchinson put Ballygunner ahead but Deasy replied with a free as the game swung from end to end. Peter Hogan, in his last act of the game, landed the ball between the posts to send Ballygunner ahead, before immediately withdrawing due to cramp.

Two minutes from the end of the 70, Barry O’Sullivan brilliantly fielded a high ball, releasing brother Brian, who sent the Red and Black two points clear.

But Ballyea battled on, with a free and 65 from Deasy, the latter in the second of two additional minutes, leaving the sides level on 2-23 apiece at the end of extra time.

In the two additional five minute periods that ensued, Ballygunner dug that little deeper, picking off three points to secure their place in the 18 November decider against the favourites and reigning champions from Limerick.

Waterford fight back to topple Limerick