Dylan Wall hit the net early on for Corofin, who finally shook off the determined effort of Mountbellew/Moylough to secure their 20th Galway football title and six in a row for the first time in their history.

Corofin now face Roscommon champions Clann na nGael in the provincial semi-final next Sunday – the fourth Sunday in a row they’ll be in action.

Noel McDonagh was sent off for Mountbellew/Moylough with two minutes remaining, while Kieran Fitzgerald – who won a record 13th Galway medal – and Barry McHugh both picked up second yellow cards in the closing stages, before Mountbellew’s Michael Daly was also sent off in added-time.

Like last week’s game, which finished in 0-07 each, Mountbellew/Moylough set out with a very tight defensive shape, designed to frustrate Corofin and to keep their scoring chances to a minimum.

Their plan got off to a great start when Michael Daly pointed from distance in the first minute, but two minutes later Corofin hit the net when Liam Silke and Dylan Wall linked up and Wall beat Damien Boyle with a crisp shot. 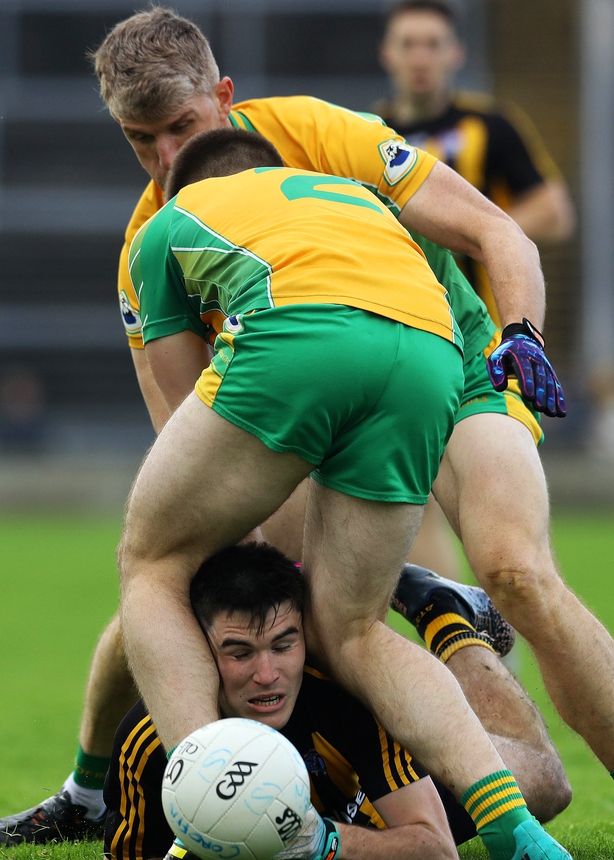 Michael Daly showed he was able to repeat his earlier achievement with a brilliant score from the right to trim the lead, but Mountbellew/Moylough should have pulled clear after nine minutes when Ger Donoghue crept in behind the Corofin cover, but his shot came back off the post.

It seemed as if Corofin had finally figured out how to cope with Mountbellew/Moylough’s tactics when they reeled off four points without reply, although Michael Farragher’s point could have been a goal, only for a good recovery from Boyle to tip his effort over the bar.

A Barry McHugh free kept Mountbellew/Moylough in touch, and the pulled off a great counter attack score when they turned over Corofin, who seemed to have held the ball untouched for three minutes, and Eoin Finnerty supplied the finishing touch to the move to make it 1-04 to 0-04 at the break.

McHugh had the chance to put two points between the sides but his free from outside the 45 metre line sailed wide, in the only action of note in the ten minutes after the restart, but Sice instead added to Corofin’s lead with a 42nd minute free.

Faced with a double-scores deficit Mountbellew/Moylough had to be a little more adventurous and Paul Donnellan was denied a goal by a smart Dylan McHugh block, and when the resultant 45 from McHugh was kicked wide their chances of victory went with it.