All-Star Paul Mannion led the destruction of St Jude's with a brilliant 1-6, all from play, as Kilmacud Crokes were crowned Dublin SFC champions again.

Johnny Magee's side brought some much needed cheer back to the Stillorgan club after yesterday's county hurling final replay loss.

The 2009 All-Ireland winners led from the opening score, a Mannion point, until full-time to claim their eighth title and their first since 2010.

It was a disappointing evening for Dublin star Kevin McManamon who was unable to inspire Jude's to a maiden title.

The Templogue outfit were regular semi-finalists until this season when they broke through to reach the decider but they never truly looked like winning.

McManamon came alive in the second half when he hit two points and set up another as Jude's got the margin down to a point at one stage.

But goals from Pat Burke and Mannion shut the door on any surprise as Crokes came out on top, securing a Leinster championship clash with Meath's Dunboyne on 11 November.

Jude's waited eight years to return to the final after their one previous appearance in 2009 but took a long time to get going.

They were held to three points in the first half with only one of those coming from play as Cork man Niall Coakley tapped over two frees.

Crokes, in turn, weren't at their free flowing best but largely bossed the exchanges and deservedly led by 0-07 to 0-03 at half-time.

Mannion lived up to his mantle as their marquee attacker with four points from play in the opening half.

The 2018 All-Star nominee kicked four first-half points with all of them coming off his left foot. 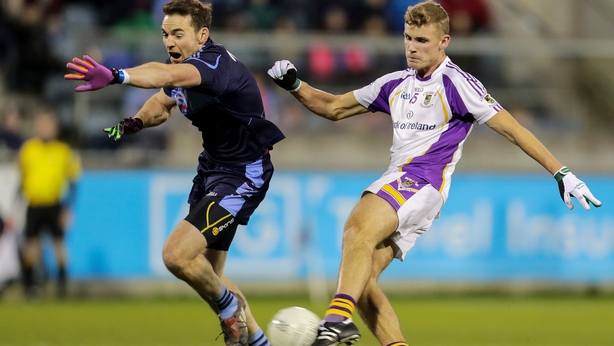 Jude's placed former Kildare defender Ciaran Fitzpatrick on Mannion but he struggled to cope with the Dubliner's powerful running and slick movement.

Another Dublin player Craig Dias was also on the mark for Crokes along with Shane Cunningham.

Defender Cian O'Connor closed out the first-half scoring with a beauty from the right wing as the Glenalbyn side put themselves in a winning position.

McManamon hinted with a neat point from the wing just 11 seconds into the second-half that he might spark a revival.

And his colleagues picked up on the greater urgency to fire a series of points that reduced the deficit to just one after 39 minutes, 0-08 to 0-07.

That was as close as Jude's got though as Crokes drew on all their big game experience to respond with a decisive 1-1 burst.

Mannion scored the point before Crokes won the resulting kick-out and fed Pat Burke who blasted in a shot from the right to leave five in it.

Jude's battled on gamely but Mannion's goal in the 57th minute when he got free of Fitzpatrick down the right to slide a low finish to the net sealed the win.