Owen Mulligan pointed from the final play of an incident-packed county final at Ruislip to rescue a replay for Fulham Irish.

The defending champions kicked three injury-time points to snatch a draw, with Tyrone great Mulligan converting a free in the fifth minute of added time.

The teams will go again next Sunday (throw-in 2.30pm).

Tir Chonaill Gaels will be kicking themselves after a malfunctioning kick-out opened the door for Fulham, while Irish will wonder how they required such a late flurry of points after their lightening start.

Those who got held up in the west London traffic missed a frenetic opening as Fulham flew out of the traps.

The game was less than a minute old when former Cavan forward David Givney beat his man to a high ball and lashed a low shot to the net. 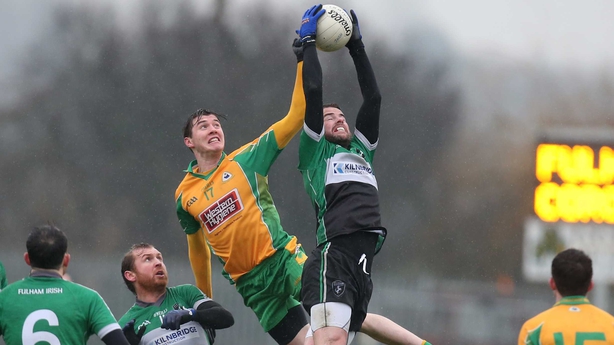 Tir Chonaill found themselves seven points down after only eight minutes, largely due to the metronomic free-taking of Liam Staunton, who became the top-scorer in this year’s senior championship after finishing with nine points.

However, the Westport native's first point from play was followed by a barren streak for the south Londoners, who went 12 minutes without a score and managed just two more in the remainder of the half.

London captain Liam Gavaghan led the Tir Chonaill fightback as the powerful runs from deep by Mark Gottsche and Brian Mullin opened up the Fulham defence.

The Gaels should had a goal on the board on 19 minutes when a great catch and pass from Killian Butler teed up Adrian Hanlon, but the Donegal All-Ireland winner’s shot hit the angle of post and crossbar.

Michael Murphy tried to reignite Fulham with a neat point from play but it was Tir Chonaill who finished the half on top, late points from Hanlon and Ryan Elliott leaving them 1-7 to 0-8 behind at the interval.

The second half was turning into a shootout between Staunton and Gavaghan, who shared six points, but the game was turned on its head on 42 minutes when Hanlon atoned for his first-half miss by blasting a shot past Fulham stopper Jonathan Tavey.

That gave Tir Chonaill the lead for the first time and they extended it to three points as the game entered injury time.

But the Gaels then proceeded to give a masterclass in how not to defend a lead. Their short kick-out strategy blew up in their faces, with Ronan Breen black-carded one minute after his introduction after committing a cynical foul to prevent a goal chance.

Substitute Mulligan took over from Staunton to slot the free and earn Fulham a second bite of the cherry.